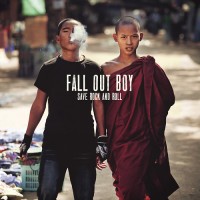 At this point, there is little to no difference between Fall Out Boy and any other mainstream radio schlock. Patrick Stump's vocals have become so good that he now shares a vocal style similar to Maroon 5's Adam Levine on certain songs, and the music is overproduced with such a coating of smooth synths, strings and drum machine/over-compressed drums that it might as well be Katy Perry (just check out "Where Did the Party Go?" and imagine her voice in it) or, I dunno, Imagine Dragons? I can't even name a high-level rock band anymore other than the Foo Fighters, but they still have integrity unlike these acts. Anyway, gone from Fall Out Boy's sound are the metalcore breakdowns, gone are the Saves The Day-inspired pop-punk chord progressions, gone are the overtly-emo Get Up Kids-inspired lyrics. They must be together as a money-making entity at this point. I don't see how these guys could have progressed from something in the punk realm (Hell, they have hardcore roots) to whatever this is without compromising their tastes at some point along the way. I could be wrong.

It was a gradual change at first. With 2007's Infinity On High the band started adding in bizarre "non-punx" elements to their sound, like rapper cameos and dancey elements heard in the hit "This Ain't a Scene, It's an Arms Race." But they still had some breakdowns and the guitars were high in the mix. 2008's Folie Ã¡ Deux found the band doing about the same thing. But the five years since that album (and some failed solo/side projects) was apparently enough time for songwriters Stump and bassist/lyricist Pete Wentz to completely abandon the genre that brought them fame in the first place.

The first track of Save Rock and Roll, "Phoenix," comes sweeping in with action-movie-soundtrack strings and kick drum thuds as Stump sings angrily about something. Guitars buried underneath chug the song to the chorus, with a catchy-enough melody featuring his strong falsetto on the title lyric. "Miss Missing You" sounds like the Killers. No, scratch that: the Killers Lite. So many synths, so little rock. "The Mighty Fall" has a rap interlude featuring the Kanye-approved Big Sean, who spits such gems as "Sometimes I swear I need a day / Just for me to lay / With some T and A." Would such awfulness ever fit into Take This To Your Grave? Or Under the Cork Tree? Not a chance. Not saying a band can't grow over ten years, but Jesus Christ.

Then Courtney Love makes her appearance known immediately at the start of "Rat A Tat" with "It's Courtney, bitch" as the the gang vocals kick in. She talks/raps more than sings, which is disappointing. Could have been a cool cameo. She sounds like Hell, as is to be expected, but the band don't utilize her gritty vocal chords well at all. The closing title track features cheesy guest vocals by Sir Elton John. Yes, you read right. And what a bad idea it was for him to appear here, because again, they use the cameo atrociously. He's barely recognizable; the man who wrote "Rocket Man" for fucks' sake. The song comes complete with cheesy clichÃ©s like "You are what you love, not who loves you" and "No, no, we won't go!" over the breakdown.

Now I'm not saying there aren't great pop songs here, so if you forget FOB's first records and judge this compared to what's on the radio, it's not as horrible. Previously mentioned "Miss Missing You" has a solid sky-high chorus hook and undeniable dance beat. "Death Valley" actually sounds a little punk with its on-the-beat double time percussion and distorted vocals in its opening minute. But then it gets sparkling-clean. "Alone Together" sounds like classic FOB songwriting, but the overly-thick production nearly does it in. It might be the best track on here, and the gang vocals off in the distance are a nice touch.

This was an odd review for me to write. These guys came from the same area in Chicago I grew up in, at the same time. While my old, old band never played with them when they were starting out (though we did play with the Plain White T's a couple times... haha) they filmed their first real music video ("Dead On Arrival") at the venue I used to play and throw shows at on a regular basis, a Knights of Columbus hall in Arlington Heights, IL. I've come full-circle: Take This To Your Grave was one of my earlier reviews as a Punknews staffer. I correctly hypothesized they'd blow up ("Fall Out Boy may be making it big soon"), but I could never have predicted the atrocities they'd commit in the name of "punk." I can only assume the title Save Rock and Roll is intentionally ironic on their part because even they should know it's quite a stretch to call this rock and roll.

Dillinger Escape Plan: One of Us is the Killer