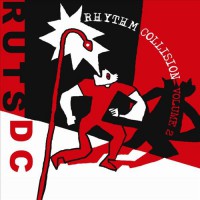 Hopefully readers should not need a history lesson on the Ruts, but maybe some are unaware of what came after the sad demise in 1980 of Malcolm Owen, the vocalist of the highly respected, yet unfortunately short-lived band. Following his death, the remaining members of the Ruts considered their options and decided to form Ruts D.C. They then headed in a sonic direction more akin to the reggae that the former band had successfully integrated into their incendiary punk sound. Rhythm Collision Vol. 2 comes as Ruts D.C.'s return following a long absence and has its feet firmly in the world of infectiously grooved, head-nodding, hand-tapping reggae/dub.

The use of the word "rhythm" in the title of the album is entirely accurate, as it forms the backbone of the record. From the opening of "Mighty Soldier," there is a huge positive vibe evident, and here the message is to lay down one's gun, something that can apply to so many situations around the world these days regardless of there being any specific target when the song was written.

Without a strong knowledge of the genre, it's still easy to say that Rhythm Collision Vol. 2 is a strong piece of work, with weaving, dreamy bass lines and crisp, intricate percussion. It's all aided by a host of gifted male and female vocalists, adding a healthy blend of variation throughout; this joining of forces of talented resources has given the album a blend of sounds that use reggae and dub as the main focus, but with other aspects tastefully thrown in such as the 1980s pop on "Mix Up" and the chilled, relaxed feel of "Smiling Culture," plus some bass lines that are reminiscent of the Specials on "One Step," along with the dreamy "The Road," where the vocals of Jessica McIntyre are sublime.

Apparently, recent live shows have shown the Ruts D.C. to be an extremely potent force, a band worth checking out if you get the chance and certainly not a group riding on the coattails of any previous successes.

Dillinger Escape Plan: One of Us is the Killer

State Lines: For The Boats