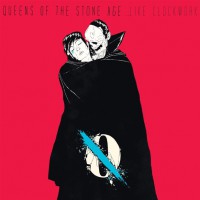 A lot has changed since Queens of the Stone Age brought Era Vulgaris into the world six long years ago. Never mind the revolving door of band members; that's always been a factor with this band. With all of the high profile side-projects, production gigs and near-death experiences, and the return to an independent label for the first time since their 1998 self-titled debut, quite frankly it's a little surprising that it's only taken six years for mainman Josh Homme to release the resulting record, â¦Like Clockwork. From the return of Dave Grohl and Nick Oliveri as contributors, all the way down to its bold red cover art, â¦Like Clockwork screams to be compared to 2002 fan favorite Songs For the Deaf, but the music contained therein could not be more different.

Even at their heaviest, QOTSA have always had a knack for a great hook, so it comes as no surprise that the album's strongest tracks are also some of the most immediately catchy and tuneful. "I Sat By the Ocean" is a musically upbeat, yet lyrically sorrowful break-up ditty that finds Homme pushing his falsetto to its highest (as he does in several places throughout the duration of â¦Like Clockwork.) "Smooth Sailing" is an absolutely massive garage-funk stomper that encroaches on The Black Keys' territory and then beats them at their own game. These tracks have bigger single potential than anything else the group have put forth since "No One Knows" more than a decade ago.

One of the most-talked about aspects of â¦Like Clockwork in the lead-up to its release has been its bevy of all-star guests. Nine Inch Nails mastermind Trent Reznor adds some of his patented industrial-strength noise to "Kalopsia" but his influence is heavily present on other tracks, as well. "The Vampire of Time and Memory" sounds an awful lot like a With Teeth-era ballad. Sir Elton John, who seems to have a thing for popping on younger (relatively speaking) bands records this year (see Fall Out Boy's Save Rock and Roll) contributes keys and vocals to "Fairweather Friends," and his unique style is a perfect foil to Homme's.

While one could never describe a Queens of the Stone Age record as lacking in energy, perhaps the biggest issue with â¦Like Clockwork is the lack of any real fast song. The vast majority of the album's tracks range from "midetempo" to "really, really slow." The songs can all be quite captivating on their own, but when taken as a whole, it could use something to break up the monotony. Past slow-burners, such as Rated R's "In the Fade" worked so well, because they were surrounded by ferocious rockers. Here, slow-jams are the rule rather than the exception. With Nick Oliveri returning (albeit on backing vocals only), it seems like they missed an opportunity to break out a "Millionaire"-style barnburner.

Tempo issues aside, â¦Like Clockwork is a thoroughly enjoyable listen that dares to try new things, when its creator would have been more than able to coast by on rehashing past glories. Not the best Queens of the Stone Age record, but a respectable showing with a few absolute gems.

The Loss: Everything You Ever Wanted [EP]