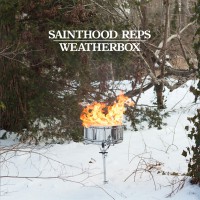 Two-trackers can be such a bittersweet pill to swallow. Sainthood Reps and Weatherbox deliver great music, as expected, but again, you're left wanting more. If this hints at what's coming soon, then it'll be a great ride.

Sainthood Reps tread promising pastures with "Deadlines" and for fans of Monoculture and Francesco Montesanto's delivery as a frontman, this'll more than satisfy. The broody, post-hardcore grunge feel is there in spades, and when you add in the backing of guitarist Derrick Sherman, it's clear he's improving as a player. There's a heavy tone and that stretched, dragging emotional core at which Montesanto tugs. They have that vague distinction, if you recall their EPs and demos, of switching to a heavier stance at times and that continues here.

Cue to Weatherbox, and as a fan of "Armed to the Teeth" and almost everything else these guys have put out, the brooding, character-filled spin they're known for churning out continues. The dynamic yet contrasting guitars add a poppy and melodic dissonance to "Big News." It's so calm, yet it capitalizes on the emotional fracture that permeates through Weatherbox's songs. It's a catchy track that'll lure you in and attach strongly. Overall, when these bands put out more music, hopefully soon, catch them. They seem to be on top their game.