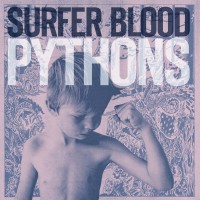 Four young Floridians who go by the name of Surfer Blood came bursting onto the underground music scene in 2009 as a Pitchfork/Stereogum buzz band, with their first demo of "Swim" generating quite a bit of excitement around popular indie rock blogs. Their blend of '90s Weezer love, Smashing Pumpkins/shoegaze guitar fuzz and South African influenced beats helped them gain traction among the competitive digital and internet-based music world and its ongoing million band competition. Plus, the songs that ended up on 2010's debut Astro Coast were just suuuper good. 2011's Tarot Classics was pretty solid too, with three outta four songs being just as amazing.

The right hook-left hook-uppercut combo of "Demon Dance," "Gravity" and "Weird Shapes" knocks me out everytime. "Demon Dance" is the single they pushed before the release of Pythons, with a video featuring the band in several silly roles, including baby-faced singer John Paul Pitts as a security guard who (spoiler alert!) gets some sweet action from a mannequin. The song shows that Pythons will be as poppy as the best moments from Astro Coast, with a super-singable chorus: "You and me are apples and trees / Don't fall far from me". But then, "Gravity." Oh, "Gravity." I've become so addicted to this song that I have to physically stop myself from playing it three times in a row everytime it comes on. I'm in danger of making myself sick of it. The chorus is undeniably awesome; pure pop rock goodness: "I think we both can see / Our own gravity / Is keeping our orbits in place." So good. And that chorus-pedal guitar line in the intro sections is catchy itself. "Weird Shapes" was released as a single way back in January and reviewed by our own Bryne Yancey. It showcases synths that mirror the vocal line as well as a new element in Surfer Blood's sound: emo screaming. I discovered in my interview with guitarist Paul Fekete that this came out of playing shitty clubs and Pitts having to yell the words to Astro Coast tunes. Also, the boys love Rites of Spring and Orchid, so it makes total sense. "I Was Wrong" slows things down, as they should after two hard-hitters. It still gets heavy in the bridge sections with more screams, of course, of "I was wrong!!!"

Pythons eschews the vaguely South African guitar noodles (most kids read that as Vampire Weekend) and afro-Cuban percussion that required the band to take on a fifth member for Astro tours. The only song that somewhat recalls the debut's paradise-flavored songs like "Take It Easy" would be "Squeezing Blood," with its funky, syncopated little guitar line and delay-laden stabs. Still, there's too much distortion to even think about comparing this to Vampire Weekend.

OK, so I've talked about every song so far, in order. Maybe I shouldn't talk about every song, but they are ALL noteworthy. I guess writing 30 or so songs, then distilling them to an album (again, information from my interview with Thomas) paid off. This plays like any other band's greatest hits. Every song is gold. I never dream of skipping a song, and every song has a vocal earworm, air-guitar worthy lead line or toe-tapping drumbeat, and most tracks have all three. And at 35 minutes, the album flies by and leaves you wanting more, when they could have easily pulled a couple more of those songs and made the album 11 or 12 deep. Surfer Blood's ability to edit and critique themselves in their early twenties is commendable. I guess I could mention the production, by Gil Norton (and mixed by Rob Schnapf), which is incredible. The guitar tones are amazing, the drums sound good but not over-compressed or with too many computer effects. Basically it sounds like they turned their Kanine sound up to 11. Still sounds like them. Vocals are a tad higher, but they were always pretty high up in the mix.

They slow it down twice to give the album room to breathe. One is the aforementioned "I Was Wrong," but the true ballad is "Needles and Pins." Don't get too excited, it's not a cover of the Searchers song, or a cover of Ramones' version of the same song. It's a bit of a joke (check the interview), but this song is still awesome. You'll be nodding along to the 6/8 acoustic beat in no time. Oddly, "Slow Six," likely named when the instrumental parts were written, is "slow" and also in "six"-eight. Putting these two next to each other is an odd choice, but they are very different songs. This one is actually slower, but much louder, with furiously strummed climbing guitar lines. It's got more yelling, too, in its bridge. It's also the only 4+ minute song on the album; again, editing themselves much more than on Astro, which had quite a few longer cuts. Closer "Prom Song" picks things back up to an andante (walking) tempo, with cowbell quarters and Pitts getting catchy yet again, with some nice falsetto pops and a surf beat in the chorus.

Surfer Blood have topped themselves with Pythons, and I LOVED Astro Coast. This album will be on repeat for me all summer. Perfect release date, Warner Bros. With this album, a major label has done something right for the first time in years.