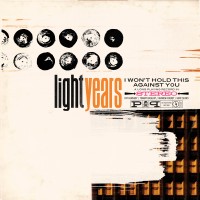 It's apparent from I Won't Hold This Against You that Light Years have potential Was it fully realized on I Won't Hold This Against You? Not really. The album's decent but there's something missing; It's not that the band necessarily played it safe or anything, but there's a sense that they didn't fully exploit their sound. That said, it'll be amazing to hear what these guys put out on their next record.

"Uphill Battles" highlights the crisp vocals of Pat Kennedy–the whole record does, really. The tight drums and slick guitar work scaled into the album set a fitting tone. "Nice To Know You" complements this and builds neatly on the theme of I Won't Hold This Against You–one of seeing things just out of reach and still persevering. It's quite predominant.

Light Years' sound is somewhat reminiscent of Stickup Kid and as a first-time listener to the band, the record comes off as somewhat impressively done. But what takes away from it, is that a few of the songs are hard to differentiate. There's a tad bit of that stereotypical, generic pop-punk sound that's so prevalent in the younger circles of our scene. However, "Ringing In My Ears," with that thick, tight bassline is one example of the band's bouts of versatility on this album, and when they do unleash their driving sound, it's firm and in-your-face. A bit more of this, and they'd have a full-blast, automatic winner.

Segue into the harmonic and charismatic "Hindsight," with its swelling indie-alternative vibe that shows how good Light Years can be when they interpret and add their own spin on things. The run-in to the end isn't bad; they pick up the pace and do well to not slump and detract from the hard-hitting bits and pieces previously draped on the album. If it's one thing to take away from I Won't Hold This Against You, it's an optimistic feeling that Light Years will be kicking more ass than ever as they continue to grow.