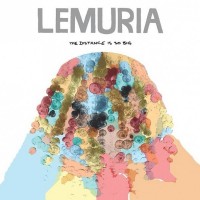 As a total latecomer to Lemuria–with my first experience being a live show last year when I was curious to hear what this band was all about–I was caught off-guard and unexpectedly blown away by what the trio delivered that night. Lemuria also shot holes through my expectations of them being a purely pop-punk band. Following that show I bought the band's second album Pebble which has grown into a favourite and my go-to choice when in the car.

Almost twelve months on from that epiphany and Lemuria are now releasing their third album The Distance Is So Big, an album on par with its predecessor but at times, exceeding it. It has everything people love about the band in abundance: Hooks, discordance, sweet pop, riffs and off-kilter moments that all combine to make a record that currently sits in my top five albums of the year. How do the same ingredients come together and better a previous musical feast? The production, courtesy again of J. Robbins, provides a slightly thicker, more expansive sound this time around.

It's impossible to not be mesmerised by Sheena Ozzella's voice as it is sweetness epitomised, and over the discordant poppy music, it's like the Siren Song as I'm left defenceless to its call (fortunately, without the fatal ending suffered in those mythical Greek tales). The other bonus Lemuria have over many bands is that their drummer, Alex Kerns, is also has a second distinctive vocalist who provides yet another string to the bow that Lemuria wields when he takes on lead vocals. When Ozzella and Kerns combine vocally, it works sublimely well, and thus creates yet another dimension of the band's sound â shown to its best effect on the goosebump-inducing track "Oahu, Hawaii."

For anyone new to Lemuria, what on the surface might seem a relatively straightforward indie-like sound will blossom into a wide-ranging, musical melting pot that contains a plethora of ingredients, allowing the band to serve up The Distance Is So Big, which is like having your favourite restaurant expand its already awesome menu even further.

"Brilliant Dancer" was a good choice for a lead single, as it's had the kitchen sink thrown at it in terms of all the qualities that make Lemuria the band they are, i.e. the excellent vocals, the shift from pop to rock and back, and time signatures that twist and turn; it's a great way to kick start the album after the low-key, 47 second opener "Michael and Stephen Moon." From there on in, it's all about that classic Lemuria sound being enhanced even more, creating an eminently enjoyable album. It's not as if the band are short of a fanbase already, but this is the work that will open a few more doors for Lemuria.

I'm due to see Lemuria twice here in the UK this summer and I'm getting rather excited even though it's almost eight weeks away as I write this review; hats off to the band for putting a spring into the step of this 47 year old with such a fantastic record.

Make Do and Mend / The Flatliners: split [7-inch]