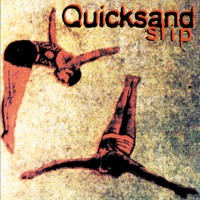 Quicksand's pedigree didn't matter in 1993. No, in 1993 they were just another loud rock band in a wave of major label rock bands that, yes, got major label deals primarily due to the success of Nirvana. The band's hardcore roots weren't important to the suits; they were looking for the next Nirvana. Everyone was.

Like many bands of the era, Quicksand's initial run pretty much came and went with a whimper. They had distribution and the connections to perform on cable TV, but they never experienced the mainstream success Nirvana, Soundgarden or any of the other "grunge" bands did. One thing those bands all seemed to have in common though, regardless of their initial successes or lack thereof, is that their legend continued to grow even as the height of the era waned.

This was true for Quicksand, too; their aforementioned roots in hardcore–with Walter Schriefels from Gorilla Biscuits and Youth of Today, Tom Capone from Beyond, Sergio Vega of Collapse, Alan Cage of Burn–ushered in a new order of more textured, nuanced, but nonetheless aggressive rock music that hadn't ever been performed within the NYHC scene, or maybe anywhere else. While NYHC had a tendency to be very samey in those days, the band's eponymous 1990 EP was for many, a first taste of something they'd never heard before. It was an invitation to a more mature, more realized future. The underground buzz translated to a bunch of opportunities for Quicksand back in the day when people still routinely traded demo tapes, and as such they were able to open for huge bands like Fugazi and White Zombie before the release of their 1993 LP Slip.

The holy trinity of loud post-hardcore bands from this era are arguably the Melvins, Helmet and Quicksand: The Melvins remained weird while occasionally reaching for accessibility; Helmet's music was calculated, punishing and often very cold; Quicksand were far more melodic and open-ended. Put it this way: Neither Melvins or Helmet could cover "How Soon Is Now?" and make it work stylistically–though the Melvins would probably try. For the Melvins and Helmet, melody was an afterthought. For Quicksand, melody was the first thought.

It's worth nothing that Slip, even in its advanced age, still completely rips. The dual guitar interplay that adorns this album, especially in "Fazer," "Head To Wall" and the sinister "Dine Alone," is still a hallmark of this sound two decades later. "Dine Alone" is maybe the band's best song altogether, in fact; the way the band seamlessly escalate and recede tension throughout the song is astounding. One can hear something new on every listen–did you notice that downtuned, nearly riff-less, buzzing guitar in the background in the second verse? Or how Schriefels seems to perfectly enunciate, even while screaming? Or how clean-yet-threatening Vega's bass sounds? Holy shit.

That's not all, though; Slip is full of all-world moments, like the escalated, dirty-bass heavy breakdown in "Lie and Wait," the jagged, open riffs in "Can Opener," and the haunting instrumental work in "Baphomet." The deep cuts are just as interesting, if not occasionally more so, than the "hits" mentioned in the previous paragraph. That depth is why Slip endures, and reigns as probably the best non-Fugazi post-hardcore record ever released.