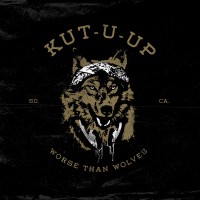 Kut U Up were contemporaries with Green Day and Blink-182, even appearing in a movie with them. Now just a few years shy of their 20th anniversary, the band, which only ever released one album on Suburban Home, have released a new EP. Because this seems to be a low stakes gambit, the Worse Than Wolves EP seems like it's just a bunch if guys having fun playing in a band and it's that much better for it.

While Kut U Up may have some pop-punk origins, they've progressed far more than their previous bedfellows. Wolves still has some pop-punk riffage and energy, namely on closing track "Trap's Set" which could even draw a little from skate-punk, but the band seem more interested in exploring self-reflective indie rock.

EP opener "Trust" finds the band drifting along in an astral haze before breaking into a bouncy bass rhythm that suggests Live and perhaps even a little Kepi Ghoulie. While Kut U Up do explore some more abstract territory, Worse Than Wolves is most invigorating when when the band snap together with more driving tempos and shout outs.

Interestingly, the band explore some pretty dark lyrical territory. The title track opens with "We are worse than wolves / hunted down like animals / three days awake taken way too far." But despite the dour message, the band drive the music with a pulsating guitar and marching drums, which makes the song both dark, but exciting.

It's unlikely that Kut U Up will ever reach the financial heights of the aforementioned bands. But, it is interesting to see where former pop-punkers will go when not "hampered" by fame, but drawn by indie exposition.

The Swellers: Running Out Of Places To Go [EP]