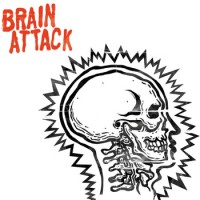 Okay, here's what little I know about Brain Attack as I write this review:

Yes, the internet is a great place to find things out and normally it can serve up a veritable cornucopia of information on a chosen target, but in this case, I'm drawing a whole load of blanks especially as the band's own presence in the land of "WWW" brings little to the fore in terms of useful facts.

So, this single contains seven tracks of punk rock that on my first couple of listens, came across as somewhat rudimentary at times but with some perseverance and another half dozen plays I realised that although the approach might not have been anything new, there was more going on than first came across. The one thing that was for certain on those first plays was how much the vocals of Chelsea led the songs. The vocals have had some reverb added and they are set back in the mix a bit; they are reminiscent of a slightly restrained version of Mish Way of White Lung.

It's no surprise that Brain Attack have played on the same bill as White Lung as the two bands have a similar sound, although the latter uses a more intrusive guitar noise on its recordings. One of the facets of the band's music that does become more apparent is the bass playing which helps drives the songs along nicely as well as coming through well in the mix. This provides quite a pleasant pummelling on my ears, and it manages to maintain a sense of being both an old and new sound all in one.

Here's an update on the things I now know about Brain Attack:

End Note â Brain Attack and Waxahatchee on the same bill; now that must have been one hell of a varied show. Anyone out there go to it? If so, what was it like?