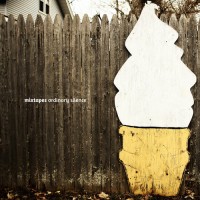 I once wrote another review about Mixtapes for another blog about how the band was probably Cincinnati's best-kept secret apart from all of the barbecue joints in neighborhoods you probably wouldn't want to be in after dark. The cat's out of the bag by now. After their moderately-sized punk label debut, last year's Even On The Worst Nights, you probably wouldn't expect them to have put out another full-length so quickly. Rappers don't even drop mixtapes as frequently as Mixtapes drop albums. Lots of people would assume a quick turnaround on albums might mean that they're not putting any work into it, and I usually would as well, but I don't know how it comes so naturally to them. It's a strength that the band has capitalized on for Ordinary Silence.

Mixtapes really had a defined sound before this album: saccharine pop-punk tunes with highly descriptive lyrics that almost felt a little too close to home, even for the people that weren't living them out. Ordinary Silence sounds like that but it's less punk, I suppose. It feels a lot like it shouldn't be a Mixtapes record. It's not sweet. It's got some pretty depressing lyrics on tracks like "A List Of Things I Can't Handle." Sonically, I'm reminded of Iron Chic, Superchunk, and the '90s but it's still definitely a record that's current in 2013. Vocally, this album lets Ryan Rockwell take a backseat on a lot of tracks to Maura Weaver and that's such a great change. Nothing against Rockwell's voice, but this album has a lot more moments where Weaver shines in a light that hasn't really been cast on her in the past. She really gets out and owns this record, which is probably one of the reasons that it sounds so different.

I mentioned the album not being as sweet as prior records and that's because it feels a lot more unhinged. It's not manic or anything, it's just that there's not any punches pulled. Traces of that popped out on "Anyways" from Even On The Worst Nights, but it's really out in full force here. Closing track "Be The Speak That You Change About," is about as close to a track like "Fuck This Industry" by Waka Flocka as we're going to get from a punk band. "Happy and Poor" is a standout for the band in that it's a perfect track to describe the niche in music they have, even though it doesn't even sound like most of their music. Paradoxes like that are going a long way to prove that the band still has a lot more going for them than you'd think.

And really, who's underestimating Mixtapes at this point? Is an album like this a sleeper hit? They're well-loved in the scene, but not for albums like this. While I've celebrated the entire catalogue, I'm really loving this album over the others. Maybe it's just hitting me in the right place at the right time, but I've found this one infinitely more listenable than the others and I've clocked tons of plays on those. Mixtapes have come a long way from complaining about their friends doing cocaine and complaining, but they've never strayed this far from home. It's a calculated risk that pays off well, and right in near the top of releases from 2013. It's a bold record that takes them into unfamiliar territory musically and could take them into unfamiliar territory in terms of popularity. It's not a genre-bending landmark release, but it's an album that should have a lot of people talking. It definitely stands that any sort of silence surrounding Ordinary Silence shouldn't be considered ordinary.

Fucked Up / Title Fight / Hop Along: live in Brooklyn