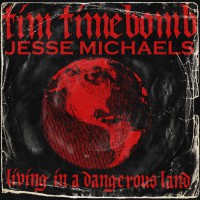 "Living in a Dangerous Land" – the first studio collaboration between Tim Armstrong and Jesse Michaels since Operation Ivy – comes as a bit of a surprise, but its actual makeup isn't surprising in the least.

Of course the song rocks. Rooted in the modern "Tim Timebomb" ska style used so prominently on Jimmy Cliff's Rebirth, the song chugs along with energy, but not the reckless abandon of days past. The Bivona gang do an admirable job with the songs rhythm, giving it a mature sound benefitting Armstrong's gruff voice. But unlike some of the older Tim Timebomb songs, these beats never threaten to fly off the tracks, making them enjoyable, but not thrilling. To his credit, Armstrong sounds better than he has in a few years, and delivers an excited performance that sometimes approaches the style he used on ...And Out Come The Wolves. Still, it's clear that Armstrong is now a punk veteran and seems quite comfortable playing the part of a punk rock Odin. It works.

By contrast, while Armstrong has become more contemplative in his vocal delivery, Michaels is as explosive as ever. Not only does his voice retain its youthful spark, but something about his slightly scratched intonation gives his voice an entirely inimitable delivery.

The way Michaels's voice seems to be stacked on top of Armstrong's lower register works to highlight their differences – perhaps too much. The track is a fun get together and all participants seem to be having a good time, but it doesn't seem to have the binding magic of Operation Ivy. Really, it seems more like two friends that haven't seen each other in a long time meeting up and realizing that while they are still fond of each other, they just don't have a lot in common. It also shows that there really isn't a use for an Operation Ivy reunion, because each person is so different now then before.

The track works as a fun one-off. It's a snapper, for sure. But it also highlights that Armstrong is comfortable in his statesman position, while Michaels seems as agitated and wiry as ever. While they might have once shared a similar headspace, they seem to be entirely different artists at this point. In a way, the piece is interesting because it works to show how much each artist has progressed and the entirely different paths they've taken. This is fun, but how about some more Classics of Love, yes?