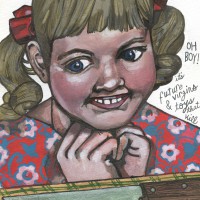 Drunken Sailor Records continues in their quest to release more music by some of the less widely celebrated bands in the punk rock scene, regardless of which corner of the world they come from. This split 7-inch brings together two American bands, with Toys That Kill offering up one track and Future Virgins, who bring a brace of songs to the party, leaving the listener with four and a half minutes of slightly off-kilter punk with a distinctly poppy bent.

Both bands build their respective sounds around a loosely similar formula: catchy songs containing melody and hooks, but with Toys That Kill it's a more or less straightforward sound, whereas Future Virgins are a bit closer towards a more conventional punk (with a bit of pop) approach.

Toys That Kill commence proceedings quite slowly with a languid intro on "Maybe This Cult Is Way Off," which quickens its pace around the half-minute mark and rambles along with the occasional shift in tempo, before picking things up quite markedly halfway through the four minute song. All this is done with a simple riff, a great guitar sound and an almost hypnotic use of the title of the song throughout which is guaranteed to nestle itself down nicely into your head, and have you singing along with ease. Simply put, this is one of the best songs of the year.

Future Virgins start off their first offering, "Passing Curse," with a more punchy delivery and a few moments that bring to mind the Marked Men, which is never a bad thing, and also the odd hint of HÃ¼sker DÃ¼, which is even better. Following this is "Counting Sheep," which keeps things moving in the right direction i.e. catchy, uplifting melodic music to put a smile on your face and a spring in your step.

I'll admit that it took me a little while to really engage with this record but now that I have, I can confirm that it's a cracking single worth buying, even if it's just for the Toys That Kill track alone, but I hasten to add that overlooking Future Virgins would mark you out as a chump.

A Great Big Pile Of Leaves: You're Always On My Mind