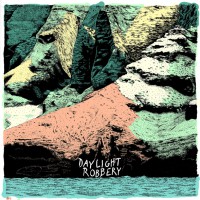 Chicago trio Daylight Robbery have been part of their local DIY scene for seven years now, with two albums and a host of EPs to their name. This three-track 7-inch is a precursor to the band's upcoming Australian tour, and is a pretty good representation of what they're all about at this stage. As befits any band that features female and male vocals (Christine Wolf and David Wolf who also respectively play bass and guitar), any recordings tend to display a bit more variety and that is clearly evident here, with the solo or joint vocals working extremely well on all three songs.

Musically this brings to mind Sweden's Terrible Feelings, as there is quite a stripped down feeling to it, with a bit of rock and a sense of the gothic to be heard. The recording doesn't compress the instruments and vocals into one sound and if it can be said that a recording has room to breathe, then this is a perfect example of what it sounds like. It's this kind of sound that also gives Daylight Robbery a more late 1970s / very early 1980s feel as well, taking a punk sound (sort of Monkey Puzzle-era the Saints as well as the Wipers) and refining it with a more rock feel, as well as adding a bit of new wave for good measure.

The title track is first up and features a wonderful rhythm to it alongside a choppy guitar, over which there are joint vocals. Next up is "Annexed," my favourite track on the single, more so because Christine Wolf provides the majority of the vocal input, and I do find her voice extremely appealing. The B-side consists of just the one track, "Disruption," which is another joint effort vocally, with a great riff and more of that infectious rhythm that Christine Wolf and Jeff Rice are able to provide.

Since listening to this I've downloaded the band's 2010 debut album Through The Confusion and although it's good, the songs on this release seem to be better than those featured on the long player. I have my fingers crossed that Daylight Robbery manage a third album as on this evidence, it should be pretty good.