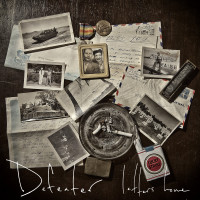 Keeping up a narrative is difficult; keeping it up through an EP and three full-lengths, even more so. But perhaps the most difficult thing of all when it comes to centrally conceptual or thematic music is moving it along and keeping it interesting, without alienating listeners. The obvious example is Coheed and Cambria, who while having a much larger fanbase than Defeater (and sounding absolutely nothing like them), probably peaked in terms of critical and fan appeal in 2005 or so. The inherent density of their concept, not to mention the fantasy-drenched imagery, turns off a lot of listeners.

On the other hand, Defeater manage to keep their storyline of an American family slowly being torn apart by World War II – and the horrors that come with it – largely intact, moving it along while using it as an allegory for more universal themes like death, loss, love and family tensions. Letters Home, the latest chapter and fourth overall, is another strong entry; it's not as large a stylistic jump as the band made between Lost Ground and Empty Days & Sleepless Nights, but it is the most direct, cohesive collection of their career.

Indeed, all the hallmarks of Defeater's sound are here: Opener "Bastards" is an intense, mid-tempo hardcore song anchored by Derek Archambault's throaty yell, impressive guitar interplay and a surefire mosh part around the chorus; songs like "No Shame" and "Dead Set" showcase the band's slower, heavier and more cathartic side; "Hopeless Again" and "No Faith" are rapid-fire anthems in which new drummer Joe Longobardi particularly shines, with impressive – but not overly showy – fills throughout.

An aside also worth mentioning: Blacklisted vocalist George Hirsch shows up for a guest spot on "No Relief," his unique vocal style – sometimes vaguely sardonic, always punishing – adding a nice flash to the song. Even with the So You Are A Magician? 7-inch relatively new and a new full-length from Hirsch's solo moniker Harm WÃ¼lf on the way, the world really needs a new Blacklisted LP soon.

Perhaps the most interesting track on Letters Home is closer "Bled Out," a six-and-a-half minute, perpetually distant song that maintains its pace and sound musically, and allows Archambault to escalate his voice around that; when he screams I am no one! I am nothing! during one of the breaks, it's perfectly raw, maybe the rawest he's ever sounded. As the song progresses, his vocals become lower in the mix, melodic guitars and monstrous drums crashing around him as he repeats the chorus from opener "Bastards" ad nauseum. And all I see is that bastard in me! It really drives the point home and closes Letters Home on a memorable note consistent with Defeater's ongoing narrative.

Against Me!: True Trans [EP]