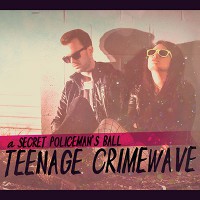 If anything, A Secret Policeman's Ball are a balancing act. On one side, they balance the cold, soaring sound of modern post-punk, referencing bands like Muse and the Postal Service. But on the other side, they'll frequently drop down into nastier, more savage territory, referencing modern hardcore without flying too close to the sun. Their debut, Teenage Crimewave, finds the band extending their reach and mostly succeeding.

Album opener "Brian's House" forecasts the LP's territory. Vocalist Nikki Oliff calls out in a distanced, almost ghostly coo. Meanwhile the music shifts, relying on a spacey texture, so that the music feels as though it is elevated above the ground. But then, Oliff snaps out in a Refused-like growl and the music screams downward, going from ethereal to threatening.

The band experiment in other areas too. One of the album's greatest accomplishments is "A Flock of Beagles" (Oh, ASPB, you know me too well) which merges together their cold sound with '80s-soaked dark-synth, creating a track that is equal parts Bladerunner and Fang Island. On "On Sweaters," the band go for the full monty, crafting a slow, but smashing neo-hardcore tune, complete with sparkling guitar lines in the back. But then again, the band switch it up on "They Already Banged," dropping a tune that could be placed without suspicion between Gary Numan and New Order.

While these disparate styles merge together, it seems that the band is still shifting. All of these songs have a certain character of their own, but due to the similar production style or playing style, they tend to merge together. They've mastered texture here, and even more deftly, have merged hardcore styles with some more '80s gloss, creating a unique beast. The band's daringness pays off and the mix here is unqiue, while still referencing its parts (and also, it sounds pretty good, too). With just a little bit more nudging, the band's songs could be something entirely unique and entirely kicking.

Against Me!: True Trans [EP]