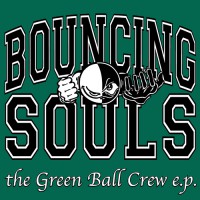 When the Bouncing Souls announced they were finally re-releasing The Green Ball Crew E.P., their self-released, self-maligned debut, it seemed like a joke. The preorder went up "with some reluctance and resistance" over at Chunksaah. Sure, some fans have been clamoring for a repress for years (this guy included), but it was kind of understood that the band got much, much better after this record. Still, for diehards, this should have been a great nostalgic lark.

And then drummer Michael McDermott quit the band, which for me prompted a much larger wave of nostalgia. Suddenly, I was listening to a lot of Souls music all at once, honoring "the new guy" from one of my favorite bands, even though he played with them for 13 years. McDermott redefined that band, to the point that I wonder where they'll go sonically once they announce a new drummer.

Which gives Green Ball Crew more emotional heft, I suppose. With the Souls beginning a new chapter in their nearly 30 year-run, it seems appropriate to take a step back and reflect on their beginnings.

Man, these guys must have smoked a ton of weed back in the day.

While Green Ball Crew is not nearly as terrible as the band members have claimed, it sounds very much like a precursor to what became the Souls' debut full-length, The Good, The Bad, and The Argyle. It's sloppy and loose but still pretty fun. Fans of Shal-era Souls will definitely enjoy tracks like "Wig" and "Kicked."

Still, do you remember in Do You Remember? (hehe) when Johnny X talked about hating the funk rock sound the Souls had in their early years? He was definitely talking about Green Ball. Red Hot Chili Peppers and Token Entry circa-Weight of the World share some DNA here, meaning the funk isn't nearly fluid enough. While the Souls would later incorporate ska and funk rhythms into their music more organically, if still sparingly, their attempts here don't quite gel.

With all that being said, though, it's hard to really fault Green Ball Crew given that it's A) the very first Souls EP, B) like 20 years old and C) bundled with a ton of warnings from the members. But in light of their recent lineup shuffle, it's important to remember what's been present with the Souls since they formed: These songs are about fun, friendship, and, sometimes, they're pretty punk rock.