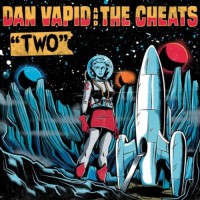 I recently saw the poster for Fast & Furious 6 outside my local movie theater. The tagline read, "All roads lead to this." I find it's a line that can appropriately be applied to Two. It's like everything Dan Vapid has ever done in his career has all been leading up to the release of this record. Not that Screeching Weasel, the Mopes, the Methadones, Sludgeworth and Noise By Numbers (am I forgetting anything?) aren't great bands, but it's as if they were all just stepping stones to this point. The evolution of Vapid as a songwriter has reached a brilliant peak with the release of the Cheats' latest album.

Clocking in at 25 minutes, the no-nonsense title Two is a reflection of the no-nonsense pop-punk found on the record. Despite a slight lineup shift since their last record (Simon Lamb moved over to guitar, replacing the departing Mike Byrne, and Noise By Numbers bassist Rick Uncapher joined the group), the Cheats have really come into their own. They sound tighter than ever before, starting off guns blazing on the blaring, fast-paced opening track "I'm A Contrarian" to the restrained and beautiful closing ballad "A Long Way."

Two has a much more cohesive sound than their eponymous debut. The songs are crisper and faster and the songwriting is pure, grade-A punk rock. Tunes like "I'm A Contrarian" and "Invader" are destined to be future classics. The backup vocals on "Miracle Drug" are infectious and fit the tone of the song perfectly. It's also worth noting that two of the album's best tracks almost certainly have Vapid's old cohort Ben Weasel in their crosshairs. Intentional or not, "Live It Down" and "Face The Music" work as a nice rebuttal to Screeching Weasel's "Carnival of Schadenfreude" and "Under the Bus."

The Apostates: Wide-Eyed and Determined