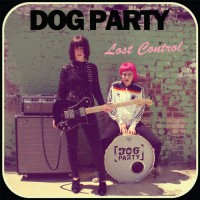 Out of the mouths of infants comes three chords and the truth. It might be unfair to continually rub the ages of Dog Party in their noses (guitarist Gwendolyn is 17 and drummer Lucy is 15) but it's impossible not to mention because their third album, Lost Control is such an accomplished recording. Also, it frickin' rocks.

Lost Control is based in classic American punk. The band flip between the electric buzzsaw of Ramones and the sharper riffage of classic LA punk a la the Germs and the Weirdoes. Their mentor, Kepi Ghoulie, has his influence heard on tracks like "How are You Doing?" in which the girls blast out a minute-long bopper that is a loving tribute to '50s rock and the bubble gum side of Joey R.

However, despite not even being old enough to see We're the Millers the girls sound downright dangerous on tracks like "Box of Handkerchiefs" where they scream "I don't want to see you/ see your face!" It's sharp, vicious and supported by a ripping, clanging guitar. They snap their voices from pitch to pitch, equal parts Eve Libertine and Penelope Houston, or like White Lung's Mish Way to be more contemporary. These songs get in, blast out a concept and get out, often shattering at the end like those Germs classics.

What's most impressive about Lost Control is that despite only having two instruments, and despite being influenced by the White Stripes, these recordings sound full. There's no bass, but thick guitar and stomping guitars fill so much space that this music radiates anyway. And of course, on songs like "Flamingo Go!" which lyrically consists of little more of the title, the girls whip forward so quickly there's no time to focus on individual instruments, just the momentum driving the song.

They do cool it off on several parts, which shows their lyrical prowess and earnestness. Often, younger bands seem to have certain topics or ideas foisted upon them, often giving the band an artificial depiction of young life. By contrast, on the Queers-ish mid-tempo stomper "Best Friend," instead of sounding like an adult writing about youthful topics, which is so common in these bands, the girls themselves write from a perspective that could apply to twentysomethings. Likewise, "Alright," which gives a slight nod to Patsy Cline with a reverbed out, laggardly tempo, shows just how strong the girls' voices are, and their skill at writing moving songs with such simplicity.

So many factory-made young bands try to hide their lack of skill with slick production, studio gimmicks and sheer volume. Not here. Dog Party know how to make a kicking, moving, genuine, bona-fide rock tune with just two instruments and two voices. I'd say they are going places, but the fact is, they've already arrived. Whomever said children should be seen and not heard was a dope and this band proves that.