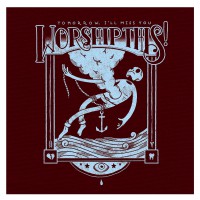 There are a few albums I've listened to regularly in my lifetime, not because they are a representation of incredible art, or because they are fun, but because they have a Pavlovian effect on me. The Draft's In a Million Pieces, Red City Radio's To the Sons and Daughters of Woody Guthrie and Avail's Over the James all cure bad days like a tonic and if listened to while in the shower or commuting, act as a kind of prophylaxis, preventing awful days from happening before they even start.

This year, I've added Worship This's Tomorrow, I'll Miss You to my arsenal of crappy-day preventers.

Writing a RIYL/FFO of this band is a difficult endeavor. They have a sound that is all their own, but I'll stretch out on a limb and say that they should draw comparisons to posi-core bands like Iron Chic, Spraynard, and Latterman. That is to say, this is the sort of record to listen to while driving or walking around on a really sunny day, and the sort of band you want to see with all of your best friends, making sure to be arm-in-arm with them, high-fiving between each song. Singers Josh Taylor and Aaron Novak deliver their voices beautifully, with raw and gruff, but melodic and honest vocals layering over and between tons of jangly guitars. The pace is energetic, with some quieter breaks that lend this to be a three-dimensional album, and not a simple collection of singles and stinkers like most others.

Lyrically, the album starts out with a bang, roping in your mind instantly with singer Taylor telling you, existentially, "I DON'T WANT TO BE HUMAN."

I don't want to be human
A species locked in a shell with no feeling at all
Is there any solution?
Deny ourselves from the prison that the world deems ours

Setting the stage for a blast of punk rock philosophy that is uplifting, motivating and thoughtful.

in "Anathema", he makes you think again:

Barricades control our lives
Making mountains out of hills that you've never even tried to climb
Now there's no one left to blame but our subjective minds will maintain
One day, we'll figure it out
Difference and accepting ourselves
Is all that's left of me what lays right here?

This is not just pop-punk about drinking beers on the beach or falling in love, this is an album of thoughts and experiences, of heartbreaks and life changes. It's a beautiful smattering of anecdotes of these men's lives and thoughts that makes you feel powerful and positive and just astoundingly alive.

When we were seventeen you kept your eyes so wide saying,
"Why the hell are we here?"
I said, "I don't know but I'm fucking terrified"
So just be here with me now

And in "Red Herring", Provchy shares experiences of breaking up, sobering up, and growing up:

This is a complex web of sad experiences and positive motivations, not just some simple punk rock album to simply flip once or twice on your turntable and place back in its sleeve. A strong contender for album of the year, it's a beautiful package, and comes surrounded with incredible art by Ryan Ford, surely a record to cherish for many years to come.