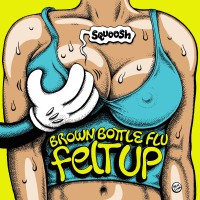 Brown Bottle Flu, a trio from Bloomington, IN, came and went too quickly. Forming in 2011, guitarist/vocalist Alex Molica, drummer/singer Sharlene Birdsong and bassist Jared Coyle played some damn fine garage rock, and you can check it out and pick up Felt Up for free (name your price) at their bandcamp.

This is their first full-length, following EPs in 2011 and 2012. Molica and Birdsong tear up their vocal chords through 12 get-down-to-business cuts full of crunchy guitars, primal drums and effective basslines. "Funeral Girl," a previously released single, is included here for good reason for it gives a perfect mission statement for the album. The song starts quick and dirty, but later slows down to a bridge with insistently cranky guitar and thumping drums. They mix it up with "Human Fly," showing their slower side with a walking tempo and Molica and Birdsong singing in unison about their "96 tears in 96 eyes" and then buzzing around overhead.

"Lucy" is one of my favorites here. It begins quiet and creepy, building to a chorus of "Lucy, I'm home" and I can't help but hope it's written from the perspective of Ricky Ricardo. Molica moans more than ever here, a style that might turn some people off but I feel fits well in this type of tune. Later, their cover of "Route 66" is pretty awesome, ramping the classic up with levels of intensity it hasn't known before. "Your Back" features Birdsong on vocals with her cool Karen O style. The riff is very Sonics, which I love.

"Rooftop Blues" is the one track I find Molica's vocal style detracting, as it prevents the listener from understanding any of the words, with every vowel sound sounding identical somehow. "Boots on the Ground" is well intentioned and has some cool freak-out sections, but suffers from it's length. And Birdsong's vocals are the lead here and need to be louder.

The artwork is, well, horrifying and dumb, but the songs within are, for the most part, worth your time. While they may be gone, their songs will live on amongst the better Bloomington garage rock bands. Go grab Felt Up while it's still free.

Worship This!: Tomorrow, I'll Miss You