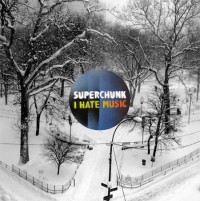 Despite starting off in their traditional feedback swell, I Hate Music finds Mac McCaughan jumping in acoustic with "Overflows." The rest of the âChunk kick into a mid-tempo electric jam featuring Mac's high whine, creative drum beats courtesy of Jon Wurster, concrete basslines by Laura Ballance and screaming guitar leads from Jim Wilbur. Just the stuff we can expect from the ultra-consistent Merge leaders Superchunk.

The hits here are clearly "Me & You & Jackie Mittoo" and the previously-released single "FOH." The first of those contains the titular line: "I hate music, what is it worth? / It can't bring you back to this Earth," in one of the better indie rock hooks of the year. In an interview with Grantland, Mac expounds upon the joke with a serious tone, saying that as we get older, for some people music doesn't have the same power to dictate emotions like it used to. For him, and luckily for all of us, it does still have that power. "FOH" i.e. "front of the house," carries with it some awesome lines like, "How's everything at the front of the house? / How's everything at the front of the house? / The drums exploded and our amps are down / But Matthew's kinda wired and we're comin' around." I don't know who Matthew is, but I bet he's pretty rad.

"Staying Home" is punker than anything I've heard from Superchunk since the early '90s. The 1:15 blast rocks double-time drums, screeching, trebely guitars and a more shouted vocal delivery from Mac. "Low F" on the other hand, dials things down a pinch to a walking tempo, utilizing some jangly guitars without being anywhere near a ballad. ""You caught me singin'!" Mac wails, a situation I can definitely relate to. "Breaking Down" takes the mid-tempo route as well, with crunchy guitar stabs and a tom-heavy beat. It builds to sweet "oooos", followed by the title line in one of the bigger hooks found on the record. "Out of The Sun" is the legitimate ballad here, in the vein of "Fractures in Plaster" from Majesty Shredding. Closer "What Can We Do" starts off slowly but hits hard in the drums, building over six minutes to an interesting chorus vocal, saying the title line in multiple rhythms and contours, showcasing Mac's unique writing style. Synths fill the sound in the long verses, adding interest in the fitting end track.

The only knock against Superchunk in general is how much their sound has stayed the same over the years. They haven't really strayed from the template they set as early as Here's Where the Strings Come In way back in 1995. Within an album they vary it up plenty, but from album to album they seem to use those same tricks. Those tricks are fucking awesome, so I don't really care, but this could be a possible complaint with I Hate Music. Is it just Majesty Shredding II: Return of the Shred? As their second album since the nine-year gap after Here's To Shutting Up, I Hate Music doesn't have the "reunion album" thing going for it, but luckily Superchunk never made a big deal of all that in the first place. They never technically broke up anyway.

And thank goodness, this record is so good we don't need to focus on those details. With I Hate Music, Superchunk will once again land near the top of my year-end list.

The Garden: The Life and Times of a Paperclip