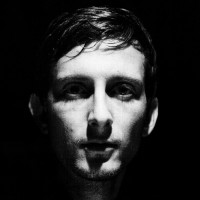 On the surface, it's been an active year for Self Defense Family. They've put out a one-sided 12-inch, are in the process of releasing a remastered and re-recorded EP of Caroline Corrigan singing over their You Are Beneath Me material, and three or four splits depending on how you count it. The band's profile has grown due to frontman Patrick Kindlon's tumblr musings rather than a consistent lineup or touring schedule. Their new EP The Corrections Officer In Me has Kindlon's face on the cover offering him as possibly the sole constant – but that's not even guaranteed.

Kindlon's time in Drug Church might seem like a way to get more Snapcase or Quicksand-laced aggression out but the first track off of the Corrections Officer EP lets you know otherwise. "It's Not Good For The Man To Be Alone," is a song that starts with a description of what you're about to listen to and then a guitar line that punches you in the gut repeatedly for three and a half minutes. For a band that live halfway across the country from each other at times, it's implausible to hear them sound this tight yet they are. "Pop Song Written On The Automall" is another driving track that lacks the urgency and strife of the first but makes up for it by maybe being the most accessible track SDF have released since the name change (or maybe that's "I've Got An Idea..."). The final song, "The Bomber Will Always Get Through" is long on running time and ambition: Kindlon has replaced his standard vocal approach with a lower-intensity, half-sung-half-spoken cadence and sounds like he's reading off a never-ending laundry list of outcomes after a bike crash. The instrumental sector keeps building and building and falling only to build again, mirroring the lyrical theme of the song itself. At first glance it's not a standout, but more time given to it allows for a great listen.

The EP isn't what I would hand to anyone to shift them in favor of Self Defense Family. It's not reaching out and grabbing any crossover appeal, but for fans of the band, it's a great addition to the material they've put out this year. While I do love "The Bomber Will Always Get Through," the band accomplished so much more in less time with the first two tracks. Last year's Self Immolation Family b/w World Virgins had two six-minute stunners, but neither ever felt that long. "Bomber" drags at points but results in a solid payoff. None of these songs are outside of what you'd expect from SDF, but they're worth a good amount of listens as one of the more captivating bands in punk continue along their path.