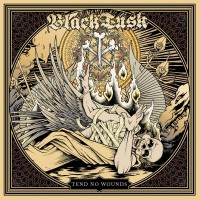 Black Tusk are defined by their simple brutality. While Kylesa and Baroness have gotten softer with age, dare I even say more mainstream, Black Tusk sound just as brutal on new EP Tend No Wounds as they did on Passage Through Purgatory. For them, artistic experimentation means adding strings on one song ("The Weak and the Wise"). Otherwise, Tend No Wounds is very much the same grinding aural assault fans should expect.

The EP's brevity plays to Black Tusk's strengths, as this sludge metal outfit has always had a hardcore sensibility. Limited to six songs, Tend No Wounds cohesively acts like a mini-LP, complete with intro and outro tracks. "Enemy of Reason" splits skulls and smooshes brains, as do all of the other songs (even "Weak," despite its arbitrary, irrelevant orchestral intro).

But all of those qualities come at a price. The intro/outro deal is effective in the short term (especially super heavy closing instrumental "In Days of Woe"); repeated listens made me wish they'd just finished more songs. Plus, at this point in their discography, Black Tusk's tunes are starting to blur together. They tend to recycle the same barked cadences. The guitars still shred nards, but the vox lose a little more power with each release. They tweak their formula ever so slightly each time, but man does it come at a glacial pace.

Still, it's been two years since the mighty Set the Dial, and it's always nice to hear from the Tusk. Tend No Wounds might not be the best starting point for new listeners (that'd be Dial or Taste the Sin), but it should tide over fanboys until the next full-length.

Self Defense Family: The Corrections Officer In Me [EP]

Reservoir: I Heard You As I Walked Away [EP]