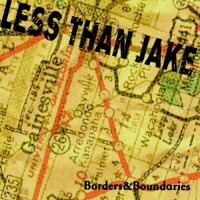 Less Than Jake takes a big risk here. They foray into the genre many call Skeemo. And is it? No. This CD does not get the chance it deserves. Is this CD a Less Than Jake CD in true form? No, and I am not hesitant to say so. Some Less Than Jake fans will be turned off by this CD. But make no mistake about it- Less Than Jake has a winner in B&B. While the first couple of songs have that same old Less Than Jake feeling- they probobly won't be favorites. Track four marks the beginning of the Less Than Jake border crossing. And I loved every second of it. Possibly one of the highlights of this CD is on track four, "Look What Happened". Chris delivers a solo, which just blows me away. His rough edgy voice takes on a softness, and it is really worth listening to. Same old lyrics, but good variety on vocals. Tracks 5 and 6 once again give a toned down Less Than Jake feeling, and track 7, "Hello Rockview" is a great song that incorporates Roger's voice more than usual, and uses it well. The track only struggles because of the fact that the whole leaving and missing home thing can get a little tired. And that leads up to the real turning point in this CD- "Malt Liquor Tastes Better When You've Got Problems"- which really strays from the usual Less Than Jake formula. But this track is simply amazing. I can't describe this song, it is really that good. Tracks 9 and 10 are once again pretty much toned down Less Than Jake usuals. Then we get to track 11. "Pete Jackson Is Getting Married" has to be one of the strangest songs I've ever heard. It is a fun song to listen to, but it is strange. My one gripe is the "na na na"s that are thrown in at the end. Just doesn't work. Track 12 is a good song worth listening to, but the real meat of this album is on track number thirteen, "Last Hour Of The Last Day Of Work", and it is a great song having to deal with the father of one of the guys. Amazingly deep song, and the lyrics really make it so- the chorus is very emotional, and makes it one of my favorite songs.

"So when ambition turns into competition I'll never be the better man."

This really makes the whole cd worth the while. That is just a deep statement. Anyway, "Bigger Picture", another amazing song, that just makes a great impression. The closer on this cd, is a song called "Faction", that states, "Sometimes, you just want to belong/at any loss or any cost." It is a great closing song, with a good statement. This CD is a favorite of mine, and I hope you take a good listen. Maybe it's not really the usual Less Than Jake. But it is Less Than Jake with some of it's best work yet.

Common Rider: This Is Unity Music