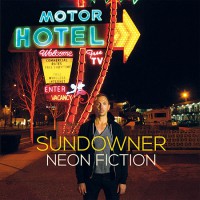 Though it seems as if we're finally getting a new Lawrence Arms record sometime this year or early next year, to say the band's members have been quiet in the time between Oh! Calcutta! and now would be an outright lie. In addition to becoming a somewhat prolific blogger, Brendan Kelly released an acoustic split with Smoke or Fire's Joe McMahon, as well as LPs with the Falcon and the Wandering Birds in that time; Neil Hennessy joined Smoking Popes, helped form Treasure Fleet and was briefly in Noise By Numbers; Chris McCaughan's mostly solo project Sundowner continues to quietly, thoughtfully chug along, with Neon Fiction as its third chapter. Given that Sundowner have now released three albums in the time *between* Lawrence Arms full-lengths, it's probably no longer fair to refer to it as a side project. Now more than ever, it's apparent that McCaughan, the professional songwriter that he is, treats Sundowner as a fully fleshed out, full-time gig.

It's also interesting how different each record has been: Four One Five Two was a mostly lush diversion with a pair of Lawrence Arms covers on it that gave it a looser, more side-project-esque feel; We Chase The Waves was quieter, more austere and a bit samey. On the other hand, Neon Fiction feels far more like a full-band record. McCaughan's acoustic guitar and eloquent drawl remain at the center, but there's far more sheer instrumentation than ever before. "Cemetery West," for example, is abundant with electric guitar parts, drums and a quickened pace in comparison to past Sundowner openers. There are lead and rhythm guitar parts in "Concrete Shoes," "We Drift Eternal" and the especially strong "Poet of Trash," the latter even approaching a certain loudness previously unheard from the band.

Meanwhile, fans of We Chase The Waves' minimalism will enjoy "Origins," a sub-two minute song that, between its pacing and lack of outside instrumentation, feels a bit longer than it is but never drags.

McCaughan's lyrics continue to be both intensely personal, easily intelligent and thoroughly relatable, no matter how direct or abstract. "Life in the Embers" and the aforementioned "Cemetery West" are simultaneously introspective and forward-looking, with the singer reflecting both on the past and the notion of having the start over–and the often conflicted feelings that come with that. Few musicians in our scene convey those emotions better than McCaughan; even a lyric as simple as Today, I let go of everything (from "Embers") resonates.

Neon Fiction is the strongest entry from Sundowner yet; McCaughan has never had a hard time finding his artistic voice, but with this record he seems to have figured out that this is no longer just a side project. Sundowner are a band, and these new songs are all the better for the recalculated approach.