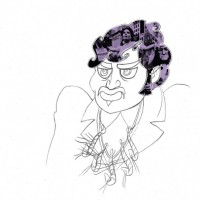 That Idle No More is King Khan and the Shrines' first release since King Khan aka Canada's-but-now-Berlin's Arish Khan recovered from a severe mental breakdown is not only readily apparent, but inseparable from its background. For the most part, each track either directly references his difficult year or is birthed from the crash and resulting rebirth. But perhaps never more so than now, a single song represents the entirety of Khan's current mindset; the closing track "Of Madness I Dream" tells you everything of importance with regard to Khan's battles.

With a dreamy garage rock base that borrows from the Beatles' Yellow Submarine aesthetic, "Of Madness I Dream" could have veered into being another respectable, but not outstanding modern indie-dream rock song. But instead of going for laggardly floating, Khan contrasts the bright music with lyrics that could have come from Rudimentary Peni, pulling the tune to the ground and going for the neck. Khan calls out in a reflective tone, "Of madness I dream/ In search of a scream/ to wake me and shake me tonight/ what dawns in my head/ there's no butter in my bread/ it gets harder bite after bite/ the fat of the lamb has devised its own plan/ to take more than it wants to give/ to die more than it wants to live." This is sublime stuff right here.

What's doubly interesting is that the song isn't representative of Idle No More as a whole. For the most part, the album snaps along with Khan's trademark combination of garage rock and James Brown-style soul. As usual, it works by referencing both the dusty sounds of yesteryear classics and adding a modern energy that makes the music seem as though it's using old school horns for the purpose of juicing up modern synthed-plastic music instead of trying to recreate the past.

Despite its title, "Born to Die" rips along with booming Motown horns and sharp riffs, making one's mortality sound like a fun thing to contemplate. "Luckiest Man," which is about Khan's recovery, jumps out of the gate like a Chitlin' Circuit stormer while Khan plays the part of Sam Moore, howling out the lyrics but savoring the shape of the words. Really, the album is so energetic and upbeat that you'd never guess that Khan spent several months traveling the globe in a state of reduced awareness, shaving off his hair, staying in a Korean monastery and completely changing his physical features.

Really, the only time Idle No More really embraces sadness on the face is in "Of Madness I Dream" and the album's other masterpiece, "Darkness," where Khan channels his inner Nina Simone. A distanced, melancholy guitar drips in the background as Khan cries over the microphone "This endless darkness never ceases to go/ in my soul." The bouncy numbers are what make this album a classic King Khan soul-rock barnstormer, but the darkened, melancholy tunes seem to be the most honest. Khan states that "there is darkness behind every sin and regret." Surely he meant, "There is darkness behind every sunny, bouncy number." Khan's most profound release to date.

Jimmy Islip and the Ghosts: The Wild West Riding