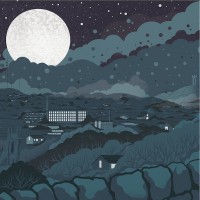 Jimmy Islip and the Ghosts

Jimmy Islip is better known for being part of a host of UK punk bands including the likes of Milloy and The Magnificant, but on this solo release he displays a totally different side to his songwriting. The tracks on The Wild West Riding have a massive country and western influence running through them, and whereas a number of UK artists going down the acoustic and/or solo route keep things less focused towards this style of music, Islip immerses himself wholeheartedly in producing a sound that is undeniably based around that base. However, there are other elements to be heard that help this album from getting bogged down in one genre.

There is definitely a big influence from Bruce Springsteen behind some of the album, from the Clarence Clemons-like saxophone on "Little London" (which also features a bit of a rock'n'roll guitar) to the storytelling of "Johnny and Julie," one of the strongest tracks on the record. It's "I Salute You" that stands out the most though, with Islip delivering a beautifully captivating vocal performance steeped in emotion, but without being mawkish. "By Land, By Sea" is another song that is packed full of emotion and it reminds me a bit of the Weakerthans, in the simple yet effective telling of a tale.

There are a number of guest appearances on the record to add to Islip's often melancholic tone, with Helen Chambers, Jon Snodgrass and El Morgan being the most prominent and the latter's contribution on "Digger's Volvo" being nectar to my ears. Despite this being a more acoustic-based album, there are still moments when an electric guitar is thrown into the mix to good effect, as are the odd times that seem to have a bit of new wave about them–Islip also manages to occasionally sound like David Byrne, especially on "William Brown (Outlaw)."

The twelfth and final track on the album is a recording of Huddersfield Town (football team or soccer to those in the USA) supporters celebrating a win at Yorkshire rivals Sheffield Wednesday and whilst many who listen to this might not understand why this has been included, for me, it's a sound I love although my preference is to hear Newport County fans singing!

There are so many people going the solo/acoustic route these days and just like any genre the quality often varies hugely, but Jimmy Islip shows himself to be in the group at the top of the pile with this release. This is a varied album that delivers on all fronts, musically and lyrically, and if you have any interest in punks going acoustic then The Wild West Riding should be a stopping point for you.