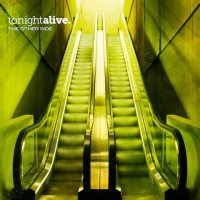 I remember reviewing Punk Goes Pop 4 and Tonight Alive's rendition of "Little Lion Man" was one of the few bright spots on an otherwise tragic record. Before jumping into The Other Side, I rewinded to see what their 2012 release What Are You So Scared Of? offered and came away impressed. However, there were specks of potential. Sad to say, this follow-up lacks a lot, music-wise and heart-wise, and apart from one or two decent interjections, leaves a lot to be desired.

There isn't that much pop-punk on the album. It honestly comes off, and yes a lot of comparisons will be made to them from a lot of folks I bet, as a campier Paramore. Hard to believe that Paramore pack more grit and edge. It shocked me, because I always believed they had the ability to cut away from that mold, but it just seems like Tonight Alive wanted to take two steps back. "Don't Wish" is the prime example of just how this record is engineered - for the new Vans Warped Tour crowd.

It's actually not a huge issue when a record is blatantly pushed out and produced for a mainstream MTV Iggy or whatever crowd, but when there's so much musically bland, repetitive layers, I find it hard to understand how this is 'the next big breakout' or why 'punk' has any association with this. "Lonely Girl" is key in acknowledging, yes, this is a young, somewhat immature, band, but it'd be nice to not feel like Taylor Swift wrote the majority of the record. Despite the nifty guitar solos tucked away in so much of the album, the musicianship, which isn't bad at all, really suffers. Jenna McDougall is a talented vocalist, Jake Hardy's guitars and Matt Best on drums have the skillset to pry into the musical world, but they just don't seem to mix well for the end-product.

The album is unabashed in its generic sound but that's the underground in me, I guess. There are little nice alternative and emo-melodic tones that cut nicely when it boils down to neat sprawls like "Complexes" and the fast-paced "No Different," but Tonight Alive have a lot of work to do to realize this tiny potential. I won't write them off and I still think I may be a bit generous here, but a little bravado is all I ask for. And maybe some differentiation.

The Criminals: Never Been Caught [reissue]