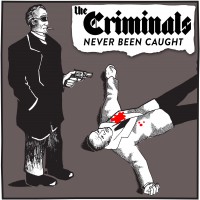 This album was originally released in 1997 on Lookout! Records, which was the label responsible in giving Green Day a leg up towards musical world domination / over-saturation. However, the link to that highly popular label of the day failed to launch the Criminals into the same stratosphere their Gilman Street buddies managed to reach. That did not stop Never Been Caught from being enjoyed by a smaller pool of punks around the globe, though.

Fortunately for those who like their punk with doses of snot and phlegm, Dead Broke Rekerds has reissued the LP sixteen years on so that fans old and new can take on an album that doesn't sound dated, even in a different century. In Jesse Luscious, the band had a frontman with a distinctive voice and enough experience to know what he was doing, moving on from his previous bands like Blatz, and his presence is what provides the band with the key element to their appeal.

For your money you get sixteen (seventeen if you include the âhidden' song) tracks that have got a bit of an edge, adding in some slightly more hardcore (of the 1980s, running-round-in-circles variety as opposed to the floor punching stuff that has become popular since) moments in with some oddly 1990s-sounding alternative rock at times. In addition, there are also nods towards the Bay Area âsupergroup', Pinhead Gunpowder, in the sound of the band. Yes, it worked then and it still works now.

There are some really âpunk' song titles including "You Stupid Fuk," "Parlez-Vous? Fuck You" and "Notes On A Barfbag (Final Approach)," which should help you get an idea of where the Criminals were coming from. I therefore doff my cap to Dead Broke for having the fortitude to reissue this.

Tonight Alive: The Other Side