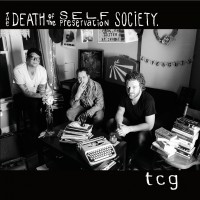 The Death of the Self Preservation Society (2013)

It's been three years since we got a full-length release from Two Cow Garage, that being 2010's Sweet Saint Me. While it's important to address a work on its own merits, I feel that the contrast between their aforementioned fifth album and their latest album The Death of the Self Preservation Society is worth addressing here, in order to better illuminate the latter work.

Those readers familiar with Sweet Saint Me will recall an album laden (but not overburdened) with instrumentation, most notably (at least in the context of a âpunk' album) piano and organ parts. These sounds permeated that record, and while there are still piano lines on The Death of the Self Preservation Society, it is a much more stripped down record, musically speaking, and much more guitar-driven. That's not necessarily a bad thing, but if you were looking for more of the same, you might be disappointed.

It would be easy to assume that the stark reduction of a particular element from one album to the next would necessitate a dip in quality on the new record, but that's not the case at all. The flourishes are still present; the major difference being that the keys are there to augment the guitar and drums, or at least that's how it sounds.

In terms of the guitar sounds, the country and blues influences we've come to expect from Two Cow Garage are intact, and if anything more refined than before. This showcasing of influences has occasionally slowed things down in the past, but short of a couple of slower numbers the album barrels along at a canter, with the odd sprint here and there.

With regard to the lyrical content, there's a fair bit about navigating the reality of adulthood, and the proper place of one's ideals within that, especially in "Stars & Gutters." To say that the theme is well-represented in the music we cover on Punknews would be an understatement, but there are very good reasons for that, not least that a good many of us are wrestling with these ideas ourselves, have been in recent memory, or will be in short order. It's relatable, is what I'm saying, and it's by no means the only theme explored, just the one that struck this reviewer in particular. And honestly, if you're navigating your late 20s and 30s and you're not feeding the experience into your work, what are you feeding into it?

There's a whole lot of bands putting out punk albums heavily influenced by roots music of various kinds, and it's easy for lesser bands to blur into one another, but Two Cow Garage are not a lesser band. They're exceptionally good at what they do, and there's clearly a lot more behind this than a couple of Johnny Cash LPs and some ill-advised facial topiary. For example, The Death of the Self Preservation Society has more than a few nods to the less-wanky end of â70s rock, and a couple of hooks big enough to restock the Candyman's tackle box.

It's also eminently danceable, and if that's not on your list of priorities, I don't know what to tell you.

Balance and Composure: The Things We Think We're Missing