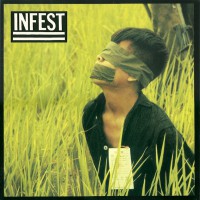 "Punk music generally, that is hardcore punk, is characterized by its speed, it has a lot of 'fuzz' as musicians call it, cranked into the musicâ¦ It's high-volume, high-speed, characterized by protest-type lyrics."

If the spoken intro to the LP is anything to go by, then Infest certainly are a hardcore punk band.

And No Man's Slave is no less than you would expect from a hardcore album: loud, hard, fast and angry, without solos or frills. The first 18 songs clock in at just under 11 minutes, delivering a powerful onslaught of insanely fast power chord progressions with the occasional slower passage. The final track, however ("My Worldâ¦ My Way") takes up the last five and a half minutes of the release, allowing the band to expand their sound towards a slower and heavier feel only briefly explored in previous tracks.

The lyrics, which were recorded after Infest disbanded, tackle a range of more or less typical punk themes (violence, war, religion, alcohol, drugs, sexually transmitted diseases, feeling awful, hating oneself, bands, cops, sheep and Nazis) in relatively simple and laconic songs. As one might expect, these are far from censored (about two dozen fucks, a handful of shits, a couple of pisses and a damn), but they needn't be since the screamed and shouted words are difficult to make out over the thrashing of the instruments.

Now, while a quarter of an hour of being screamed at by a powerviolence band may not seem like a great idea on paper, the LP procures that sense of liberation and empowerment that only true punk can. It's an unexpectedly good piece of work, showcasing Infest at some of their best (during their breakup) and warranting a listen from all fans of the genre.