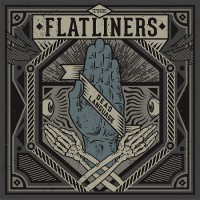 The evolution of the Flatlinersâ€“from an exuberant but very green ska-punk outfit to a mature, powerful melodic punk groupâ€“has been fun to watch and hear. 2010's Cavalcade had all the characteristics fans of the genre seek like buzzsaw guitars, melodic leads, anthemic choruses and introspective lyrics. What set it apart from the other 10,000 or so currently active melodic punk bands was the execution: the lyrics were much more than wrought notes about being drunk and sad; the musicianship was much more than leads pulled from No Division or Astray; the songs had an air of appealing rowdiness while also being very calculated and nuanced. Cavalcade felt different because it was different.

So, how does a band follow that up? In the case of the Flatliners, it's with their most direct record of their career thus far. Dead Language doesn't quite possess the wow factor Cavalcade did at the time of its release, but it's still a very good record that if anything, shows a band finally comfortable in their own sound.

The most immediate difference between Cavalcade and Dead Language is speed: while the former was pretty sonically diverse, it had plenty of burners like "The Calming Collection," "Here Comes Treble" and "Shithawks," among others, that largely carried it; the latter hangs its hat on more mid-tempo fare like "Birds of England," "Drown in Blood" and "Ashes Away." This isn't necessarily a bad thingâ€“"Bleed" and "Count Your Bruises" in particular are still some of the most memorable songs from Cavalcade, and they're not exactly pushpit anthemsâ€“but the difference in urgency between that album and this one will be the first thing most listeners notice.

Dead Language contains a fair share of gems sure to become live staples for years to come, however. Opener "Resuscitation of the Year" features lots of quick drumming, cool guitar interplay and fun gang vocals; "Drown in Blood" has perhaps Chris Cresswell's best vocal performance on the album, his voice snarling around and within the song's excellent chorus; the poppy bounce of "Hounds" and "Caskets Full" set them apart from some of the mother mid-tempo fare on the record. Then there's "Quitters," which at 2:04 should feel awfully crowded with all its tempo changes and wild drumming but never does.

At 13 songs and 40 minutes, Dead Language feels a little too long, but a slight lack of leanness isn't enough to detract from what's a completely solid punk record. For the first time in their 11 years as a band, the Flatliners seem comfortable. This is their band; this is their sound.