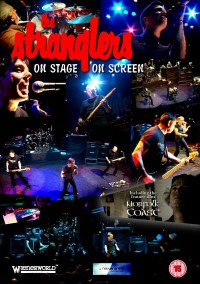 On Stage, On Screen is what changed my opinion of the post-Hugh Cornwell lineup of the Stranglers. Now of course, any discussion of both Hugh Cornwell and the Stranglers is always met with the dismissive counter-attack, "He left the band in 1990 and wasn't the only songwriter or only founding member! Let it go, already!" While all of that is very true, Cornwell's contributions to the band continue to drive their imagery and concept, despite that he has been out of the group for almost a quarter century.

Cornwell contributed a unique attribute to the Stranglers very few bands had in any capacity. While the Stranglers were a pre-punk band that used the energy and anger of punk before punk knew you could do that, and while the Stranglers were also not afraid of proggish keyboard gymnastics, Cornwell was able to bring singular cold, tactical brutality to both his lyrics and performance. So the question is, without Cornwell's Lucifer-like mugging, what can the Stranglers do to elevate their songs?

The answer is rock the hell out. On this 2005 live set, which is one of the last tours to feature Cornwell's replacement, Paul Roberts, the band tear through a tight set spread among their at the time unreleased Norfolk Coast and their harder classics. The set finds the band returning to their original inspirations. In lieu of synth-driven mid-tempo pieces, they race through their tracks, likely channeling the same drive as the original rock 'n rollers. Original members J.J. Burnel and Jet Black are firmly in the driver seat, pushing the band along at a rapid pace that equals or even rivals their earliest live takes. What's most striking is how tight they sound. Despite the speed of the songs, the band snaps together as a singular unit, with energy and edge, but also a powerful control.

Roberts puts in his fair share too. Perhaps understanding that he doesn't have that inherent darkness of Cornwell, he goes for an Iggy Pop or Mick Jagger angle, increasing the energy and making the tunes smash down as hard as they possibly can. It doesn't hurt that his voice is impossibly deep, like a Sinatra-meets-Pop merge. Likewise, Burnel's youthful contrast to the more berserk Roberts still sounds as great as it did on Rattus Norvegicus. This is a band primed for performance.

The DVD supplements the live show with two main extras. The first is a live, acoustic performance. Further betraying the band's dedication to rock and roll, despite being acoustic, this isn't a sit-down-on-stool affair. Rather, the band plays with the energy of the electric performance, and really, they strike down on the strings so hard that it really just sounds like interesting takes on these songs instead of, "Here are our songs just played without electricity."

The other feature is a short film called Norfolk Coast which is a companion to the album of the same name. The film stars Burnel as a depressed father that has recently lost his wife to perhaps suicide, but maybe murder. The twist is that Burnel's character was traumatized as a youth through some Wickerman like rituals of which his own father was heavily involved. It's an interesting concept, and while Burnel does an serviceable job acting, the film relies heavily on monologue and flashback, whereas those scenes would have been better if played out, or at least not spelled out.

But no matter how you spin it, the electric and acoustic performances are top notch, exciting, rapid takes of classics and newer songs. Cornwell and the rest of the Stranglers still nip at each other now and then. The old adage goes "kill âem with kindness," but Burnel-led The Stranglers seem to use "rocking-the-hell-out" as their weapon of choice.