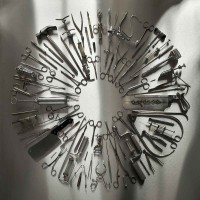 Assurance that death metal progenitors Carcass are back in full force on new record Surgical Steel starts with the packaging. The cover references their legendary Tools of the Trade EP. Deluxe editions come with an actual surgical kit. They have long hair again in pictures. The whole thing is so damn metal.

But what good are gimmicks without the tunes to back them up? Surgical Steel is an almost disturbingly great return to form, essentially deleting their maligned last album pre-breakup, 1996's Swansong, and returning righteously to extreme metal. The record essentially splits the difference between Heartwork's relative embrace of melody and Necroticism â Descanting the Insalubrious' sheer brutality. As if to hammer that distinction in, Surgical Steel essentially shifts from one style to the other over the course of its nearly 52-minute running time.

Things start off succinctly with "Thrasher's Abattoir," in which frontman Jeff Walker lists all the methods of murder available. Not without a sense of humor, he promises death to "hipsters and posers," because seriously fuck the posers. "Time to die / Die in pain," goes a line that comes closest to serving as a chorus. The next few tracks continue to make with the grind.

It's around track six, "Noncompliance to ASTM F899-12 Standard," that the record starts shifting towards bigger, more melodious guitar pyrotechnics, eventually culminating in perhaps the three catchiest Carcass tracks of all time: "Unfit for Human Consumption," "316L Grade Surgical Steel" and single "Captive Bolt Pistol." As galloping and grinding as the tracks get, there's still a triumphant, epic wave throughout.

The whole thing culminates in the massive, eight-and-a-half-minute finisher "Mount of Execution." It almost feels like it belongs on a different record, what with its atmospheric acoustic intro and power ballad-esque tempo in its first half. It gets going eventually and it's a good track, but it feels really out of place stylistically after such a relatively concise set of songs. Folks who splurge for the digipack deluxe edition get a bonus track, "Intensive Battery Brooding," which is also available on the "Captive Bolt Pistol" single. It's also a little out of place, but hey, it's more Carcass.

Not to get all "death to false metal" here, but Surgical Steel is so clearly better than most metal records released this year (or really even longer) that it's ridiculous. It doesn't resort to chest-beating nor does it attempt to dilute its primal metal urges. It simply cuts through.

The Stranglers: On Stage, On Screen [live DVD]

Royal Headache: Stand and Stare b/w Give it all to Me