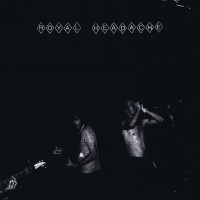 Royal Headache wowed listeners with their self-titled full-length and its classic take on fuzzed-out garage punk; those songs were simply, masterfully constructed for maximum impact and catchiness. Fat-free. Royal Headache also sounded like it could've been recorded in 1977, which, yeah, a lot of bands have done that lately, but too many of them went too superficial with it, creating a sound that while aesthetically rough, was dully, cloyingly obvious to the average punk fan. Royal Headache's take on it just felt realer, and it still does on their new 7-inch.

These two songs, originally released as part of Matador Records' 7-inch singles club earlier this summer, continue in much the same vein as the band's other material. The mid-tempo, power-pop gait of "Stand and Stare" lends itself well to the soulful-as-ever vocals of Shogun, who remains one of the most talented singers in the genre. Right now, there's just not much better in music than hearing him croon over jangly guitars.

"Give it All to Me" is much shorter and rowdier, with a loud, tightly-wound, Marked Men-esque feel. The aggression drowns out Shogun a little bit, but the invigorating multi-layered guitars that hover around the song's end make up for that. In fact, both of these songs have a slightly louder, more live room feel than those of Royal Headache's full-length, which enhances their impact even more and is a minor change that hopefully resonates on future recordings.