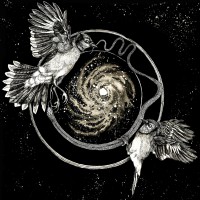 Vattnet Viskar's sludgy black metal sounded promising on the New Hampshire group's self-titled EP. On their full-length debut, Sky Swallower, they prove to be even more. Sky Swallower is a grab bag of grind ân' drone, jumping from plaintive acoustic passages to obliterating blast beats on a whim, and often within the same song. Doing so keeps the brutal parts brutal.

Black metal is no stranger to hybrids, but it's striking that the bands Vattnet Viskar most resemble aesthetically have little to do with the genre. The passionate quiet/loud dynamics recall screamo act Envy, especially now that Vattnet Viskar have embraced breakdowns. The sprawling acoustic sections sound not too far off from Earth's more psychedelic moments (dig "Ascend," in addition to the final moments in album ender "Apex"). Vattnet Viskar is definitely in the black metal wheelhouse (obliterating drums, dissonant guitars, guttural vox), but they're defined just as much by what they don't do (which I guess means they're, I dunno, jazz or some shit?).

Not that Sky Swallower ever lets up for long. Clocking in at 38 minutes, the album doesn't have time to dillydally. Opener "New Alchemy" makes a point of pulverizing the listener right away. "Fog of Apathy" is just as heavy at half the speed. "Mythos" slays with its monolithic chugging. This is a record of contrasts. The somber moments make the loud ones hurt more, and vice versa. While Sky Swallower suffers a little for its brevity (excluding the interludes, it's really just a five-track album), it's pretty much the best one could hope for given half that half the band quit during the writing process. But while the record was perhaps a couple of songs away from being fully realized, it's hard to knock when what did come about is so solid.

Into It. Over It.: Intersections