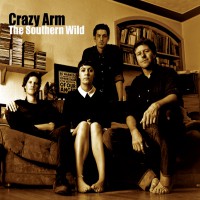 For four or five years now, I've not been able to contain my admiration for Crazy Arm. The band have frequently written, released and performed passionate music that has usually blown me away. However, there's another side to the band that's become increasingly important to its personnel in that time in the form of more acoustic journey, a journey in which footsteps have been followed and new trails trod. This version of Crazy Arm has performed in various forms over the past few years, and it hasn't always clicked when I've seen them play live acoustically. This has been down more to circumstance than anything â equipment issues, frequent change of personnel/instruments on stage which have stopped any natural flow, etc. But in the past twelve months or so, through thick and thin (the loss of two members, a lengthy period of public inactivity), this element of the band has been the remaining member's main focus. In fact, The Southern Wild was recorded whilst Crazy Arm were searching for a replacement rhythm section.

The Southern Wild is the result of this other direction and reflects Crazy Arm's love of âreal' country, roots and Americana. If I had doubts about the live acoustic shows (and to be fair, it's over twelve months since I've seen the band in that guise) then I knew that the album would be a different affair â in the studio the band would have the time and space to nail down exactly what they want and achieve a successful end result.

The album opens with Vicky Butterfield's voice displaying newfound strength and depth on "Oh Death/Hell To Pay," before being joined by Darren Johns, whose voice is perfect for this venture. Together, they create a really strong vocal duo for this and subsequent tracks. The vocals are bolstered further on the occasions that Patrick James Pearson enters the fray, creating a well-layered outcome.

There are two tracks on the album that have been released previously but both "Fossils" and "Roasting River" have been given slightly new identities without losing the appeal they originally had; the former is simple yet warming to the core, whilst the latter provides one of a few foot stomping moments on The Southern Wild aided hugely by some excellent banjo playing from Johns.

There is one song that sits outside the more country/roots delivery and that is "County Jaws," which with the help of Pearson's keyboards has much more of a '60s vibe, even bringing the Doors to mind in places.

The liner notes clearly lay the influence for the final track, "Black Canyon" at the feet of David Eugene Edwards (Woven Hand/16 Horsepower) and Crazy Arm deliver the song in a fashion that would probably receive nods of approval from the man himself; it's certainly got the same sort of feel as material from both those bands and is a strong end to a remarkable album.

Out of all the tracks on The Southern Wild, it's "A Pocketful of Gold" that connects with me more than any of the other tracks, as Johns delves into the realm of family, upbringing and passed on traits along with basic survival in this world we inhabit. The song has a bit of a âbirth, school, work, death' feel to it and to my mind it contains some of the finest, and most moving, lyrics Johns has written and performed.

The musicianship throughout the album is top-notch and there is no hint that this is something being done to follow any fad â Johns: vocalist, guitarist, banjoist, songwriter etc. has never made any secret of his love for the artists and bands that have influenced him and these are not confined to the likes of The Clash, X and Conflict: he embraces so much more in terms of music and the messages conveyed, although the latter is the one thing frequently shared across the genres, and this album is the fruit borne from those wider influences.

There is no doubt that along with the likes of Jimmy Islip, whose The Wild West Riding album highlighted his musical talents beyond punk rock, Crazy Arm also possess more than the one string to their bow. The Southern Wild is delivered with ease and it's a beautiful collection of songs that touch me probably more than any of the band's previous work.

Despite being quite different to the first two Crazy Arm albums, The Southern Wild doesn't stick out like a sore thumb in the band's catalogue. It's part of the logical progression of what the group have been trying to do: there's no settling for more of the same as Crazy Arm push their own boundaries in respect of what can be achieved. Both Born to Ruin and Union City Breath packed quite a sonic punch, whereas The Southern Wild retains a sense of power more subtle on the ear. I fully expect this album to be keeping me company for many years to come, as it has a sense of longevity about it that stands out after only a handful of listens and is firmly cemented on further plays.

Into It. Over It.: Intersections

Touche Amore: Is Survived By