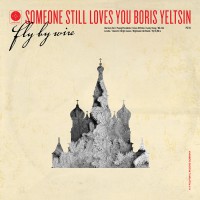 Someone Still Loves You Boris Yeltsin

When describing Someone Still Loves You Boris Yeltsin, no word encapsulates and effectuates the band's sound better than one: nostalgic. Since 2006's breakthrough Broom, the group have produced unassuming indie music entrenched in '60s and '70s power pop with inundated consistency - head-bobbing melodies, lush harmonies, unstoppable hooks, all wrapped up in convenient, easily digestible 3-minute packets. Never afraid of slinging shit to see what sticks, SSLYBY's fourth full-length Fly By Wire demonstrates the band's greatest strength: the ability to amalgamate modern pop into a recursive, vintage palate for the new millennia.

After a brief departure for the Chris Walla-produced Let It Sway, SSLYBY returns to the familiar attic of Will Knauer's parent's house, where they recorded Broom and sophomore follow-up Pershing. As if inspired by a reunion with a place from the past, Wire opens with piano and strings that steadily, but gently, cascade into a thick, layered haze, accentuated by filtered, breathy vocals. "Harrison Ford" does its best recreating the confused, earnest urgency that is young love by juxtaposing the orchestral soundscape against a lo-fi veneer. The feeling intensifies when they drop the melody and replace it with eerie percussion clicks and the sound of nature, singing, "And the night moves way too slow/ How the heart beats I'll never know/ You got it right such a long time ago/ I got so high/ I got so low." It's a slight digression from the Springfield trio's typical M.O. - one more blithe than austere. Indeed, there is nothing coy about, "Wild eyes, you don't have to be good."

"Young Presidents" continues the tactic, building off of SSLYBY's inconspicuous acoustic guitar and innocuous percussion with synthesizers and electric handclaps. While these elements have become fixtures in modern pop, here they work to expand and diversify their sound. For SSLYBY, whose approach is indeed derivative of another era, these two songs represent their most experimental foray since Broom.

From there Wire regresses to a demurred form, giving full faith and credit to the indie pop SSLYBY routinely tap - from the sun-bleached melody on "Cover All Sides," to the mid-tempo finger-picking on "Ms. Dot". Even "Lucky Young," which could just as well have been a deleted Peter Bjorn and John track with its opulent vocals and minimal to maximum guitars, features SSLYBY's signature "bah bah bah" harmonies. In the same vain, the lyrics are equally as cognate; lines like "there's probably a proverb or a parable that's parallel to you and me" from the pensive "Bright Leaves" is borderline nauseating. Even the Beach Boys weren't that mawkish.

It works for them, though, especially when they're on â€“ and I mean really fucking on. Lead single "Nightwater Girlfriend" is three and a half minutes of marinated bliss. Pawning '90s power pop like a cheap date, guileless Weezer guitar progressions push forward in welcoming repetition, bouncing from clean, head swaying strumming to ultra fuzzy crunching. Like master card players, they don't tip their hand too soon, first breaking into a dancey, disco-infused bridge before bluffing the final moments and then calmly laying their two pair on the table. You'd be pissed off if it weren't so perfectly executed.

By this point SSLYBY is indie's old dog: they never learn any new tricks, just new routines. The innate grasp at posterity makes it increasingly difficult to write exciting, compelling music. When it uses the present to inform the past, Fly By Wire comes off fresh and engaging. But when the past guides the present, the end result is an overwhelmingly underwhelming record.

But heyâ€“all's not lost. At least it's catchy.

Touche Amore: Is Survived By