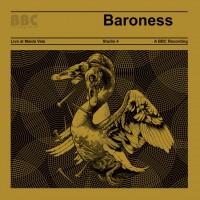 At this point, it almost feels clichÃ© to write about Baroness and what they could have achieved had their bus accident not curbed their tour to promote their best, most mainstream record, Yellow & Green. But as a guy who got to see their last Philadelphia show prior to the accident and their first one back with a new lineup, it kind of means a lot that the live EP Live at Maida Vale exists. This is the only option left to hear the Yellow & Green lineup.

Admittedly, that kind of makes the EP a diehards-only affair. All four of the tracks have stayed in the band's live show post-reformation. There are no rarities present. Hell, barely a year has passed since the album was released. Without context, the record loses some of its emotional weight.

But if you believe music is a conversation, then these alternate versions are a hell of a topic. Recorded a little over a month before the band's career-stalling accident, Maida Vale starts off with a laxer but still ferocious tweak on "Take My Bones Away." By "March to the Sea" and "Cocanium," the differences become far more noticeable. The guitar solos get gnarlier and more extended, keyboard lines are dropped in favor of a rawer sound, and the whole thing gets heavier without sacrificing melody. Closer "The Line Between" picks up speed, ultimately besting its studio counterpart through force of will.

Additionally, the EP comes with a sweet presentation. The single-sided vinyl has an etched John Baizley creation on the flipside, making it booth beautiful and super easy to keep on repeat. The BBC unwittingly captured a lineup perhaps too pure to stay together, as the band presented here have a looseness that comes with years of playing together, but that's part of the charm. A year after Yellow & Green and its accompanying setbacks, the songs continue to dazzle, and a version of the band that no longer exists at least gets some due.