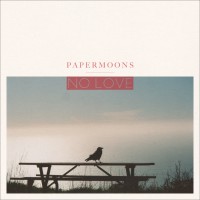 Austin, TX's Papermoons impressed a lot of people with their 2008 debut New Tales by writing supremely relaxed, pleasantly textured indie-pop that nodded to the Promise Ring's underrated Wood / Water without completely aping it. Listening to that record, it's clear that Matt Clark and Daniel Hawkins are perfectionists; every sound, note and nuance is intentional and often, completely engrossing. In part, their perfectionism – not to mention moving, marriage and other life events – explains the five-year layoff between New Tales and No Love; the quality of No Love validates it, too.

Papermoons' sound hasn't drastically shifted despite the long layoff; atmospheric keys, tasteful acoustic guitars, unflashy percussion and sweet vocal harmonies abound on tracks like opener "Arm's Length" and "Pining." One noticeable difference, though, seems to be the influx of electric guitar; most of these songs are much fuller and louder than those on New Tales. Those guitars are mostly used as a tension building and releasing device (especially on "Oh My God" and "Deep Blue"), but on other songs they serve different purposes: "Matchbook" is the most tightly-wound, concise pop-rock jam in Papermoons' catalogue thus far; "Goodnight Son" has a slightly-less-rambunctious Dinosaur Jr. feel to it, right down to the hushed vocals and soloing; the aforementioned "Deep Blue" has an added heavy bounciness because of its guitar work. These songs aren't aggressive by any means, but they do have a lot more personality than some of the material on New Tales on the whole.

The quieter (at least until the end) "Pining" leads into closer "Lungs," a six-plus minute slow burner in which Clark and Hawkins really stretch their legs. Sparse guitars and an extended vocal harmony lead into a progressively louder, interesting percussion sound before a gently plucked acoustic takes the lead again amidst distant distortion. Hawkins' drums re-enter the fold and the pace picks up, with Clark's soft vocal delivery orbiting around layers of interspersed guitars. For a long song with so much empty space, "Lungs" feels surprisingly full and realized, especially through a nice pair of headphones.

As fall begins to rear its colorful head, many people will reach for music like Papermoons' No Love. With notes of melancholy, excellent musicianship and an understated pop sensibility, it's an appropriately strong choice for the season.