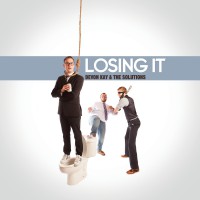 Devon Kay and the Solutions

It's always hard to find funny punk rock that I actually like. Yes, I love the Abs (perhaps the funniest band ever), The Vandals had a go and sometimes succeeded, as did 30 Foot Fall, but on the whole I tend to prefer my punk rock with just a modicum of a humorous tone. However, Devon Kay and the Solutions have provided one of the exceptions to the unwritten, and to be honest, fairly loose rule.

The success of Devon Kay and the Solutions' ability to reel me in is twofold: firstly, the band don't seem to be trying too hard to produce an amusing record, and secondly, they have a knack for writing good tunes that are almost impossible to ignore. If that wasn't enough, Losing It is a long way from being a one trick pony anyway, with a variety of song structures and styles in its dozen tracks.

Whether it's a New Jersey style sound that brings to mind the Hold Steady or Timeshares, a more native Midwestern sound reminiscent of a host of bands (some of which these guys also feature in, like Direct Hit!), the West Coast sound with hints of NOFX, or the occasional revved up, harder edged sound, this record seems to have it all without ever seeming cluttered (unlike this paragraph) by the diversity. Whilst I'm extolling the positive virtues of Losing It, I might as well add that it flows really well all the way through to the final track, "Decemberween," which is an epic closing in on five and a half minutes long.

So, where are the gems on Losing It? Well, if you play the CD on random I'm sure that you'd end up on a different gem each and every time. If pushed I'd point people to "Mikey Erg (Made My Girlfriend Cry)," "Toilet Drunk," "We're All Gonna Die (Suga' Boy)" and the aforementioned "Decemberween" as being my favourites and as such worth a listen.

I'd finish by stating this is a very, very good record â if you like punk-pop, melodic punk or even Appalachian nasal flute music, you should find something here to give you some satisfaction.