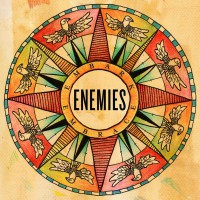 Enemies have a knack for taking things up a notch on the math-rock scale and they've gone harder on Embark, Embrace. If you liked "Robert Reid" from 2011's Coco Et Moi, then you're in for a treat. However, there's a little feeling of longing for more exposition. It doesn't detract from the record and it's still satisfying at the end of the day, but there's a somewhat hollow taste in the mouth when all's said and done.

"Executive Cut" and "Unit Shifter" offer that ambient atmosphere on which Enemies pride themselves, with intricate pickings and hard riffs that convalesce at just the right times. The rhythm and melody bobbles in between rock, electronic and pop but the cracking drums drive the tracks home amid scattered vocals, which I must emphasize, are minimal, and allow exploration of their musical scope. Enemies are not breaking new frontiers, kicking down barriers or adding epiphanies to the instrumental-math rock realm, but they continue to plant neat little seeds and hand-deliver great technical works.

Enemies entrust their work to their skill with instruments, and it seems that they draw diagrams, collate what sounds good or doesn't and then extrapolate what needs to be inserted to enhance the sound–which I'm sure a lot of bands do, but Enemies come off as more scientific in it than artistic. They manage to make it work, though. "Indian Summer" adds enough jazz and blues to the rock template to show how experimental and bold Enemies get. They certainly hack away and try to command the listener's attention with meshed-in interludes, a conscious breach which certainly maintains said attention. You're never going to be in a lull. That's for sure.

"Moesha" and "Love Unlimited" herald their versatility and what's great is that their musical inferences are posited with such ease. I attribute this to their skill set and their desire to extract the best calculations from their instrument sheets. Again, it comes off as more scientific than artistic, but what's impending in their music is a feel that it's too robotic at times. Not robotic in a detrimental manne,r but something which insinuates maybe they may not be as confident in just how viable their music can truly sound. Maybe more vocals will shed this, maybe it won't. Maybe they need to just cut loose a bit more. Some of this material has a been-there-done-that quality, but I can appreciate the fine-tunings and variations here and there. I think however, a bit more of this was needed to have Embark, Embrace embrace and achieve its full potential.

Devon Kay and the Solutions: Losing It