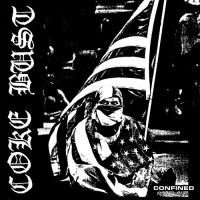 Washington, DC's Coke Bust are seriously pissed off. That's evident without even reading the lyrics of Confined, which are not the easiest to decipher during their delivery. Coke Bust provide the soundtrack to every non-peaceful protest the world has seen; it's vitriolic, belligerent, in your face and most of all, downright effective. If ever a blueprint was needed to provide a guide to how angry punk rock music should and could sound, then Coke Bust would probably be the band to be up for the task of compiling such a document.

The squeal of feedback which heralds the beginning of opener "Iron Spiral" is tantamount to an air-raid warning and for those of a nervous disposition, it might be wise to duck and cover such is the intensity of the ensuing onslaught. The aural blitz lasts for a fraction less than nine minutes but in that short time, Coke Bust offer up a whirlwind of hardcore featuring the occasional breakdown, some blast beats and one song, "Red Line," that at 80 seconds long, is to them an epic. "Red Line" is also my favourite track on the album, as it stretches out the intro which allows a bit more diversity in terms of the guitar work, before it dives into the more standard maelstrom that Coke Bust provide.

Reviewing this from a download, all the tracks flow almost seamlessly together which I find is a positive when listening to albums that are short in duration. The other element that I enjoy is that there is clearly no filler here, as each track really does stand out (in spite of the conjoined nature of the songs). In terms of good hardcore albums, I'd put this up with the recent release from Stoic Violence, another band who believe that an impact can be made in a short amount of time.