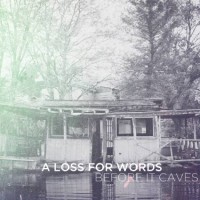 A Loss For Words

Rise Records gets its fill of melodic, easygoing pop-punk from A Loss For Words. On 2011's Sanctuary, it was apparent that there was something unexplored that if unleashed, could well put the band atop their usual billing. On Before It Caves, they try their best to bring out those elements but sadly, a few critical points are trampled on, leaving the album a tad short and feeling starved of progress from its predecessor.

The onset of Before It Caves feels like a somewhat rough around the edges mash-up of Yellowcard and Story Of The Year. "Conquest Of Mistakes" and "Distance" tend to fall on the poppy, generic side of the spectrum and do not hold strong interest, as Matt Arsenault struggles to add distinction with his voice. He does rectify this later on but initially, it seems like he and the band are caught in a safety net. The vibrancy and energy is missing. Leaving the listener to delve into the nucleus of the record to get this assumes they have patience and it's a risky move–inadvisable, too.

Much like on Sanctuary, AL4W really shine when they take off the gloves and cut loose a bit. "Falling" is a speedy example of this and the liberation suits the band well. Tracks like "No Pioneer" and "Block" tread on the poppier side of things but again, the change of pace takes the listener for a better spin, with little homages to bands like Simple Plan and Sugarcult being hinted at from time to time. The band sound more assured, and less like they're force-feeding mid-tempo punk to their audience.

The record flows more organically with "No Merit To Envy" and the acoustic "Brace Yourself," representing a more compelling, complete band, or at least hints of one. But beyond that, there are points of disconnect that lack intensity and fail to fuel interest. There's nothing to ignite a listener into comparing this to a band like The Story So Far, who do this genre so much justice.

As likeable as some of Before It Caves is, much of it seems detached, bewildering, clueless and expressionless. Those moments hinder a lot of what the gents are hoping to achieve and take away from the shrewd, malleable and kickass vibe we know they can dish out. Sharks will be circling to pick them apart and as nervy as Before It Caves gets, there's nothing to signal eternal disrepair or a band that perpetually fall short of the mark. They need to weather this storm, brave the ruins and let it register. Until then, they're running on fumes and lessening the smoldering potential they had years ago.

The Slow Death: No Heaven