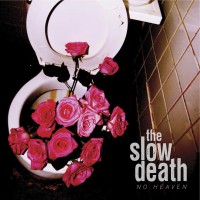 Jesse "Pretty Boy" Thorson has a back catalogue that already proves he can write a great tune. Catchy melodies, awesome lyrics, and a whiskey-soaked throat that belts them out as loud as his meaning. Familiar or not with his previous work, No Heaven stands out all on its own. With nine songs, who knows if this is a full length or an EP, but who cares? The songs all flow together and make the listener realize how much they hate their lives, how lonely they are, and how they can easily accept it because seriously, what's the difference? Life is life. Sometimes it is awesome and sometimes (more than not) it sucks a bag of dicks. Thorson and the Slow Death choose to write about the latter and god bless them for it.

Opener "A Little Less Ugly" starts the album out slower than expected, yet, more great than imaginable. It's pretty much a follow-up to Born Ugly Got Worse, which is not a bad thing: Catchy, guitar-driven, angry/still gut wrenching and meaningful. After this, the album begins to create a whole new monster. "Nowhere Left To Sleep" is arguably one of the most catchy songs the band have ever done, a short and sweet song with quick-paced harmonizing guitars. "I Need A Drink" is an all-out assault on our precious ears, with Thorson at his most desperate and depressed. (Side note: I recently saw the Slow Death open up for Dillinger Four and they played this song. Usually, new songs are boring to the audience and nobody gives any sort of praise or recognition. Yet, during "I Need A Drink," everyone still moshed and accepted it. This song will undoubtedly be one of the tunes that will live on forever in the band's live set.)

The title track sounds like it could have been on the band's first album, with one exception: the singing. Jesse Thorson sings his heart out on No Heaven, something that he just didn't completely do on Born Ugly, Got Worse. There's nothing wrong with a guy who wants to broaden his vocal range, but I must admit, it is refreshing to hear the guy scream his lungs out again. "On Your Own" is another example of this. However, it is also a great way to show how much the songwriting, melodies and playing has changed over the years. This is by far one of the standout songs of the album.

The "ballad" of No Heaven is "Raise Your Head Up." I'm generally all for ballads and Mr. Thorson has written and recorded some amazing ones in his time, but it feels a little lackluster compared to some of the others and to the other tracks here. Compared to most other new music these days, this track is still much better, and, it kind of glues "No Heaven" together. Still, this was the lackluster moment for me. Luckily, "Nothing Is Cool" picks things back up again and rejuvenates my hope in music and life. Four chords can go a long way, but it takes a great songwriter to do so. Jesse Thorson does it with "Nothing Is Cool" and the following track, "Breathin'." He is able to sing the neglected thoughts of the average human being and present it in a song catchier than most could ever dream about writing.

Perhaps this review is biased because I most certainly dig everything Pretty Boy Thorson has done with the Fallen Angels and the Slow Death, but I went into No Heaven with an open mind. I will never trust Jesse Thorson or completely put my faith into anything he ever does. If you've ever met the guy, then you'd think the exact same way. Regardless, No Heaven is a great album that closes perfectly with "Hang Up The Phone." No Heaven is by no means a concept album and "Hang Up The Phone" doesn't put everything in perspective and cures us of all our ills, but it does bring forth a perfect conclusion to the album.

A Loss For Words: Before It Caves