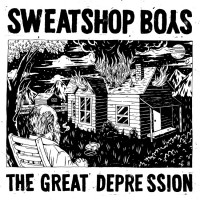 Some bands defy comparison. I'd say Sweatshop Boys are one of those bands. It's not that they're above and better than all other bands, nor is it that they have created a new genre whilst extending the boundaries of modern music; no, it's more of a case that I listen to this and it sounds fresh and invigorating without any thoughts of "oh this sounds a lot like so-and-so" cropping up.

So, how do I get you to buy into this without any of the usual reference points? Well, what you need to know is that this quartet from Israel (Really? I would have sworn from the first track that they were from London Town!) crank out quite a varied amalgam of garage, power-pop, '70s rock and punk with a twist of new wave thrown in for good measure across the thirteen tracks on this debut long player.

It comes down to extremely catchy and guitar-driven (in a jangly and lightly fuzzed way) songs that have enough bounce to them that it's quite a job to keep my head on my neck whilst nodding along to the record. Whilst there is a bit of an edge to some of the songs, generally this is pure power-pop with a number of elements which add to my enjoyment, ranging from simple female backing vocals, to handclaps and the occasional use of keyboards â all little things but ultimately used to good effect.

There are actually a few moments in one song that remind me of something else, and although those lines being sung in "Hermaphrodite" have a similar melody to parts of "Ultra Blue" by Thrice, I would never say that the two bands are bedfellows in terms of their musical output but I can't get rid of that tiny connection when listening to the track.

Throughout the album there are some stunning songs and if you're of a mind I'd point you towards "Crazy Eyes," "Aya Doesn't Like The Garlic Bros" "Solo" and â¦. oh what the hell; any of the tracks on this record would be a good place to start. Just do it.

The Slow Death: No Heaven