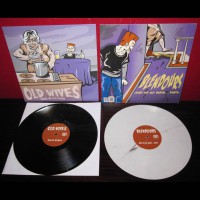 What first drew me to this record were the frequent message board comparisons to Screeching Weasel, Green Day, and the '90s Lookout Records sound in general. It's crazy, these bands both approach this sound from completely different angles, but each manage to arrive at the same spot somehow. Old Wives may have heard a few more Crimpshrine records, and the Blendours may have spun a few more Muffs LPs in their day, but they're still rooted in the exact same tradition: Power chords. Marshall amps. Vocal harmonies. Pop Punk. Classic, leather jacket pop punk. The kind that would make Joey Ramone proud.

Edmonton, Alberta's Old Wives take the A-side of this split, offering up six tracks of riff-driven, a-little-bit-tough-but-still-a-nice-guy pop punk that brings to mind early Blink 182 more than anything else. But I get the impression that they might bristle at that comparison? I don't know. They're solid tunes, with a recurring theme of growing up and how much it sucks. It's clear from the lyrics and the songwriting, that punk rock has been the driving force in these guy's lives for a long time. I can relate.

On the B-side, Iowa City's the Blendours counter the laments of aging with nine sonic assaults of adolescent absurdity and humor. And that is in no way a bad thing â the Blendours are one of the best, if one of the least known, pop punk bands in the world at the moment, with complex male/female harmonies, clever, goofy lyrics, and a healthy nod to '50s rock 'n roll and even a hint of '80s new wave. It's tough to picture, but imagine Buddy Holly playing distorted guitars, with Belinda Carlisle (The Go-Go's) singing backing vocals. It's beautiful, it's unique, and it's hard to get out of your head.