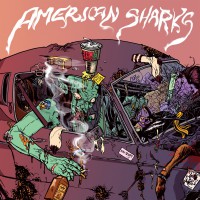 With few exceptions, heavy metal takes itself far too seriously. The same could be said for portions of punk, emo or just about any other genre of music of course, but in metal it seems, well, heavier. This despite the fact that even the most serious metal is often inherently ridiculous in both concept and execution; if one had to describe heavy metal say, to a child, it might sound something like this:

"Uh, there are some guys, they're usually wearing all black or even cloaks, they go onstage and play really loud songs about dragons, wizards, demons, aliens or all of the above. They usually don't look at each other or the audience while they play. They usually don't talk between songs. It's AWESOME."

While those types of bands certainly have their place, others who seem to embrace the inherent goofiness and fun of metal, ironically, often appear smarter than their peers. That's just part of the brilliance of American Sharks. Their self-titled debut is driving, heavy and above all, fun as hell.

At nine songs and 19 minutes, American Sharks has the leanness of a classic punk record. The trio astutely never let a song or even a riff outstay its welcome, even when it's extra tasty like on the MotÃ¶rhead-meets-Red Fang opener "Iron Lungs." Will Ellis' approach to guitar is refreshingly workmanlike, loaded with low-end fuzz and only fleeting moments of flash, which make the instances in which his fingers do melt across the fretboard ("Satan's Overture Pt. 1," "Indian Man") all the more exciting.

The album's back half is just as entertaining, with the demonic voiceover juxtaposed with repetitively pounding riffs on "XVI" being an initial highlight. Vocalist Mike Hardin alternates between a clean, throaty yell and a more soulful approach depending on what each song or lyric seems to require, and he's impressive throughout. His filthy, rumbling bass work is an asset too, especially on "Demon with Glass Sword" and "Cocaine." Drummer Nick Cornetti gets moments to shine as well, such as on closer "11:11" where his impressive fills interact rather interestingly with Ellis' guitar and Hardin's bass as opposed to simply keeping time.

American Sharks is quick and dirty, which makes sense considering the guys hail from Austin, TX and cite greats like New Bomb Turks and the Stooges as influences. This record has serious crossover potential and shouldn't be overlooked by even the most discerning punk.