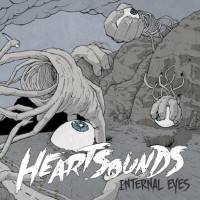 For some people, a classic sound never goes out of style. Heartsounds know that and use it to their advantage. Their third full-length Internal Eyes maintains the overarching EpiFat sound of Until We Surrender and Drifter, but with some new elements added to the table. Internal Eyes is the second album with Trey Derbes as Heartsounds' drummer; he brought a more dynamic, collaborative sound to Drifter and that continues here. Also ramped up are the dueling vocals between Ben Murray and Laura Nichol, not to mention significantly more harmonies and a fair amount of oohs and aahs for good measure.

Internal Eyes opens with "A Total Separation Of Self," which bursts with the familiar speed, technicality and aforementioned dueling vocals. The album then moves onto perhaps its strongest track in "Cycles." The song begins with Bad Religion-esque speed and features plenty of harmonies and a memorable chorus of "I'm breaking down but I want to get out of here", hitting all of the right notes and making for a great singalong, one that should translate well in a live setting.

The title track really changes the pace of Internal Eyes with its smooth riffs and impeccable timing, which dovetails nicely into the fresh blast of speed that is "Can't Always Be Looking Down." While the middle of the album doesn't sag or contain filler, Heartsounds save plenty of good tunes for later in the record. "First Light" is an emotional anthem about the pains of relationships, providing a nice, slow reflection throughout; Second to last is another strong track in "Afterthoughts," which tackles moving beyond personal loss; "The World Up There" makes for an exceptionally strong closing track with more great harmonies, pulsating speed and more buzzsaw riffs.

Internal Eyes marks a great leap forward for Heartsounds, as they don't reinvent their sound but simply build on it and add a few new flashes. It would be easy for them to have written a mirror image of their first two albums, but instead they manage to strike the right balance between old and new, a feat not easily achieved. Fans of Heartsounds will definitely be able identify and enjoy what is familiar, but will also have a new set of songs to look forward to hearing live.

Courtesy Drop: Songs to Drive To; Cry, and Make Love To